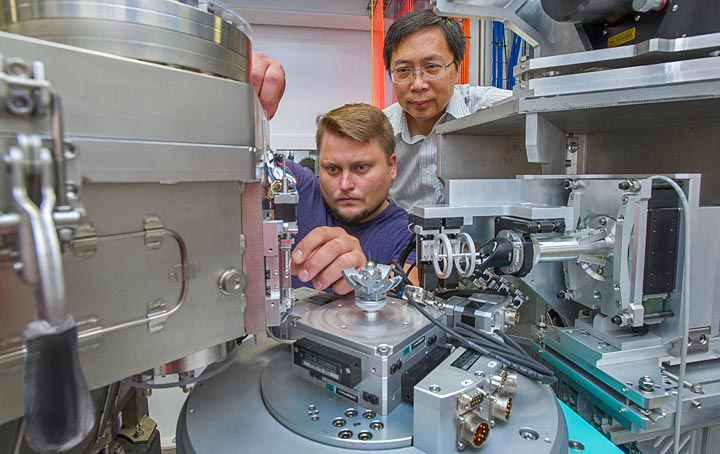 Imagine a planet, a gas giant like Jupiter.  The biggest planet in our Solar System is composed mainly of helium and hydrogen, which make up a thick atmosphere above a molten rocky core. But where does the surface begin and the atmosphere end on a planet like that? Where is the line between the gas phase and the fluid at its center?

Questions like these can be answered by understanding the boundaries between phases of matter. Through the classic example of water’s three phases – steam, liquid, and ice – we often come to the conclusion that these phases are delineated by strong boundaries that can’t be breached, like a brick wall.

But expose certain gases to enough pressure and heat, and they will enter a hinterland between the phases, a supercritical area where they can have the properties of both a gas and a liquid at the same time. This extraordinary behavior of ordinary liquids is exploited for use in many technologies.

Fluids in the supercritical phase share the properties of liquids and vapor, so they can easily diffuse through solids like a gas and dissolve materials as a liquid might. For example, supercritical fluids are used to “wash” caffeine out of coffee to produce decaf. This property also comes in handy for the production of pharmaceuticals and cosmetics, and even in dry-cleaning processes. These fluids are also a key component of nuclear waste cleanup methods.

Dima Bolmatov, a physicist at the National Synchrotron Light Source II (NSLS-II)—a Department of Energy Office of Science User Facility at Brookhaven National Laboratory—led a study to better understand the nature of the boundary between phases and the behavior of supercritical fluids, using high-energy x-rays to examine the atomic structures of supercritical fluids at different temperatures and pressures. This work is published in The Journal of Physical Chemistry Letters.

“People used to believe that supercritical phase was dynamically and structurally uniform,” Bolmatov said. “My phonon theory of liquids predicted that the supercritical state is not uniform, but that there is a boundary instead, namely the Frenkel line, that demarcates thermodynamic, dynamic, and structural properties on the phase diagram.”

These two distinct domains within the supercritical phase were proven through the experimental work done by Bolmatov and his group. “We didn’t just detect the Frenkel line, we also explained how thermodynamics behaves within and beyond the boundary.”

Knowledge about this boundary helps scientists fine-tune supercritical fluids using temperature or pressure in order to use them more efficiently and better predict the behavior of the fluid.

“Tune those two parameters, and you can find the coexistence of two or even three phases,” Bolmatov said. “It’s about the rearrangements of atoms and molecules. That’s why pressure and temperature make a distinction between phases.”

For the experiment, Bolmatov and his collaborators Mikhail Zhernenkov, Alessandro Cunsolo, and Yong Cai used a diamond anvil cell to increase pressure on a sample of argon, while also increasing the temperature until it reached the supercritical phase. At the Advanced Photon Source, a DOE Office of Science User Facility at Argonne National Laboratory, they performed inelastic X-ray scattering measurements to determine the changes in the atomic dynamics as heat and pressure increased. Such measurements helped understanding how sound waves propagate through the fluid. All these tests resulted in a new understanding of the boundaries between phases. Instead of an abrupt change, they found that supercritical fluids transform between phases in a smooth, continuous manner.

Bolmatov’s work will continue at the Inelastic X-ray Scattering (IXS) beamline at NSLS-II. Yong Cai, the NSLS-II IXS Beamline Lead Scientist, is in charge of the development, operation, and management of IXS.

“IXS will offer the best energy resolution in the world for measurements of atomic and molecular dynamics at the nanometer length scale,” said Cai. “These capabilities enable scientists in the world to study sound control and heat manipulation in disordered materials, like liquid crystals and glasses, molecular transport through biomembranes, or to understand interaction of nanoparticles dissolved in water.”

Now in the commissioning phase, the IXS beamline plans to be operational by the end of 2015, when it will begin hosting scientific users.