Meet Robert Palomino: 'Give Everything a Shot!' 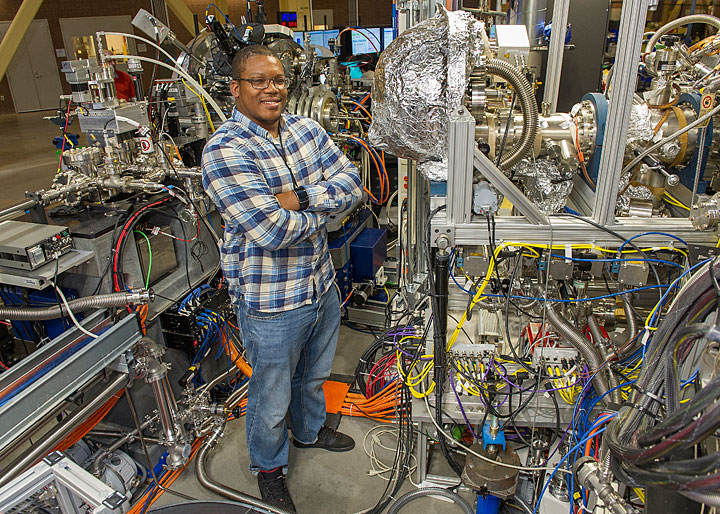 After earning his master’s and Ph.D. in physical chemistry at Stony Brook University, Robert Palomino is now one of Brookhaven Lab’s new postdocs in the Alliance for Graduate Education and the Professoriate–Transformation (AGEP-T) program, working at the Lab’s new National Synchrotron Light Source II (NSLS-II) to study the structure and other properties of catalysts. He joined Brookhaven in August and will spend the next two years working under the supervision of Jose Rodriguez in the Chemistry Department.

But when Palomino was in high school in Rockville Centre, chemistry was his least favorite subject. His goal in life was to help people, and he thought he might accomplish that by becoming a doctor. As a pre-med college student at St. John’s University, he started as a biology major and volunteered at a hospital to get practical experience.

“It didn’t feel challenging enough, to be honest,” he said. “There was a lot of memorization — easy but monotonous. But when I started taking chemistry courses, they challenged me.  I had to study hard and it was something interesting to keep me engaged, so while I was still in pre-med, I switched my major to chemistry and found it’s what I wanted to do.”

He got all the way up to taking the medical college admission test before his first research experience made him question his choice of a medical career.

“I didn’t have enough experience just volunteering at the hospital to see if that’s what I really want to do for the rest of my life, “ he said. “And after being introduced to research, I realized that was what I enjoyed doing more.” 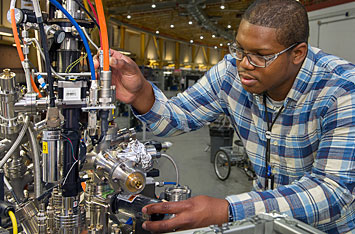 Palomino was bitten by the research bug when he participated in a summer program at Georgetown University.

“It was a research experience for undergraduates—and it gave me the experience of trying to do things and having them not work,” he laughed.

“I was working on copper-based catalysts that synthesize cyclopropane. The research on the catalyst I helped to synthesize was later published, resulting in the first paper on which I was an author. Experiencing 'new' research was what really made me want to switch to a career in research instead of the medical field.

As a graduate student, Palomino received a National Science Foundation fellowship with the assistance of a writing workshop offered by the AGEP-T program. After that fellowship was over, his Stony Brook advisor connected him with Terrence Buck in Brookhaven Lab’s Human Resources Department. Buck, who also works closely with the Educational Programs Office, arranged for his postdoc position under Rodriguez, who Palomino already knew from previous grad school collaborations.

“I thought this was a great fit, both for Robert and for Brookhaven,” Buck said. “My passion is to recruit and retain the top talent in the science, technology, engineering and math fields, and Robert is a top talent. In the AGEP – T FRAME program he will have the opportunity to work for at least two years as a Research Associate here at Brookhaven and give himself even more career options. I am very proud to have Robert in the program.”

“What I did before was like structural analysis, using the light produced by a synchrotron to illuminate the atomic structure of catalysts while they’re undergoing a reaction,” Palomino said.  “My advisor and I figured out what catalysts and reaction conditions we were going to study, and as I progressed, I came up with more intricate details. If we needed to change the catalyst in any way, I worked out ways to do that.  We started by talking about it and then I tried things and showed him the results. As I got more independent, there were a lot of frustrating times — something like 70 to 80 percent of what you try doesn’t work.  So it makes the satisfaction with the 20 to 30 percent that does work even greater.

“That work is similar to what I’m doing now, but now I’m going to be working at the NSLS-II. Before, I would travel around to the Stanford Synchrotron Radiation Lightsource, the Advanced Photon Source, and the original NSLS to get more beam time.“

“We were very happy when Robert decided to join our research group,” said Rodriguez. “In his current project, Robert brings a very good knowledge of the chemistry of catalysis and how synchrotron-based techniques for catalyst characterization work.”

Palomino was married during graduate school and has a 9-year-old son and 3-year-old daughter. He and his family live in Middle Island. While working as a postdoc, he is still weighing his career options.

“Initially I wanted to go into industry because I didn’t really like the idea of teaching too much,” he said. “But at a government lab, I have a lot more freedom than I would in industry. You can research what you want to research as long as you make a strong case for funding it. What I really want to do is continue to do synchrotron studies, and learn the different techniques.