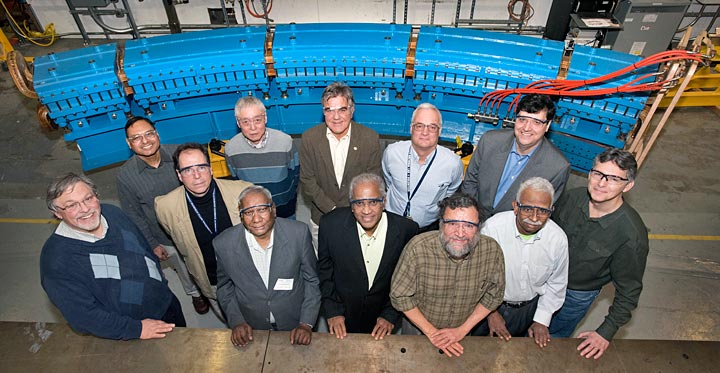 “Testing this first magnet assembly is a first step toward building a prototype of this novel accelerator.”

Reports from treatment centers around the world suggest that particle beam therapy results in better outcomes with fewer side effects when compared with conventional x-ray radiation treatment, particularly for tumors in sensitive areas such as in the brain or near the spine. The reason: charged particles such as protons can be precisely aimed, and deposit most of their energy where they stop, instead of producing the kind of pathway of damage that x-rays deliver when they move through tissue.

Early results from carbon treatment facilities in Asia and Europe—there are currently none in North America—suggest that carbon ions, with an even more precise delivery and other biological advantages, may be even more effective than protons. The Brookhaven/Best Medical design would offer the flexibility of treatment using either particle type, along with other improvements including operational simplicity and a scaled-down magnet size compared with other carbon-treatment facilities.

“Testing this first magnet assembly, a curved girder holding three full-length and two half-length magnets, is a first step toward building a prototype of this novel accelerator,” said Brookhaven Lab accelerator physicist Stephen Peggs, one of the architects of the design and a principal investigator in a Cooperative Research and Development Agreement (CRADA) between the Lab and Best Medical. The testing will take about six months. If all goes well, the team will order five more magnet assemblies made to the same specifications, and then begin building a prototype accelerator at a Best Medical facility near Pittsburgh, Pennsylvania. 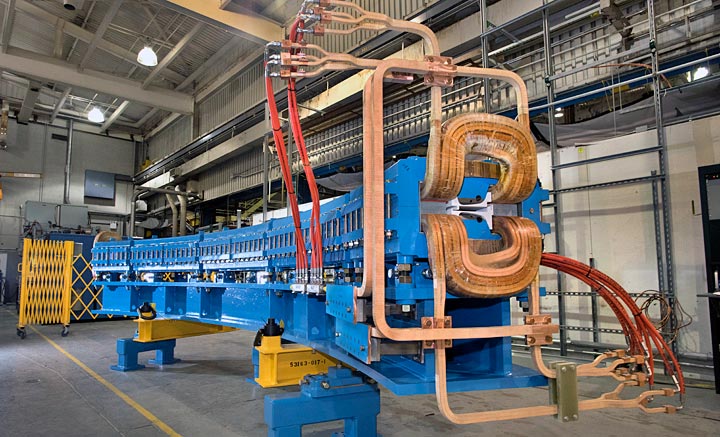 This end view of the girder shows the magnet iron in blue, and the multiple copper conductors that carry the electrical current to make the magnetic field. The conductors are contained in a block of epoxy to insulate them from each other. Cooling water flows through the center of the conductors, entering and leaving by the orange feed pipes in the background.

“The aim is to deploy the technology to medical treatment facilities to make carbon and other particle beam therapies available for research and for treating patients,” said Joseph Lidestri, a consultant for Best Medical.

Manny Subramanian, Director of Research and Development for Best Medical, added, “It is exciting to collaborate with the experts at Brookhaven Lab to develop this unique device that is potentially useful for treating cancer patients throughout the world in an efficient way.”

The defining characteristic of the iRCMS is its rapid cycling. Fifteen times per second, the power supply increases and decreases the current in a repeating, reproducible way. A bunch of particles receives a synchronized push once per turn —like a child being pushed on a swing—ramping up the energy as the bunch moves around the racetrack shaped accelerator. At the right time—when the bunch has achieved just the right energy—it is extracted and sent down a beam line to the patient.

The cyclical changing of beam energy allows operators to extract beam at any energy—even at a different energy on each successive cycle—just by changing the timing of the extraction. Since beam energy determines how far into a patient the particles will penetrate before depositing their tumor-killing energy, this flexibility to select energies gives doctors exquisite control in delivering radiation doses.

“With the iRCMS, doctors will be able to deliver smaller individual doses very precisely, and very quickly change the depth at which the dose is delivered, to target the entire volume of a tumor,” Lidestri said. Peggs likens it to delivering many small shots in rapid-fire fashion, instead of one big cannonball, with the ability to deposit those little “bullets” exactly where you want them.

Rapid cycling also means that fewer particles need to be circulating at any one time. This increases safety and has other advantages, including the ability to build the accelerator using smaller magnets. 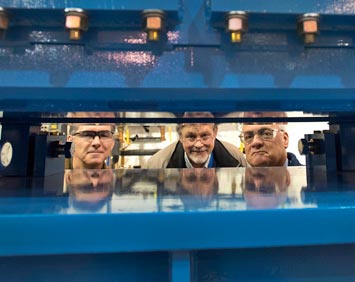 Chris Cullen, Jon Sandberg, and Joseph Tuozzolo looking through the girder supporting three full-length and two half-length magnets. This 60-degree assembly will make up 1/3 of the curve at one end of the racetrack-shaped accelerator.

The arc-shaped magnet assembly that just arrived at Brookhaven is just over 17 feet long, with each magnet being about 2 feet wide by 14 inches tall. Designed by Brookhaven physicists Dejan Trbojevic and Wuzheng Meng, and engineers Joseph Tuozzolo and Chris Cullen, these magnets have a combined function—both bending the beam around the curved path at the ends of the accelerator racetrack, and alternatingly focusing and defocusing the beam. This “alternating gradient” design mimics the strong focusing concept first incorporated in Brookhaven’s famous Alternating Gradient Synchrotron (AGS), and now used at accelerators around the world.

“Using a string of magnets that alternately focus and defocus the beam in the horizontal and vertical directions keeps the beam size small, so the magnets can have a small aperture and the entire accelerator can be relatively small,” Meng said.

That reduction in accelerator size is important for a variety of reasons, including requiring less electrical power to operate, weighing less, and occupying a smaller overall footprint—with the latter two factors reducing the cost of constructing a hospital wing to house such a facility.

But these mini magnets still have to be mighty enough to bend beams of carbon ions. “It’s almost three times harder to bend carbon ions than protons,” said JK Kandaswamy, a physicist with Best Medical. “This makes it even more important to scale down the size and weight of the magnets.”

Each magnet is made of many cross-sectional layers of laminated steel, shaped to precision to produce the desired fields for focusing, defocusing, and bending the beams. Each layer must be engineered to the precision standards specified by the Brookhaven team, and assembled with laminate insulation between the layers to break up potentially disruptive eddy currents that develop within the steel itself. Small errors in shape, thickness, and alignment of the layers can cause big changes in the quality of the magnetic field.

“Because of the combined function nature of the magnets, and the rapid change of fields that they will experience as the accelerator cycles, we needed people with world-class competence to test this first assembly,” said Lidestri. 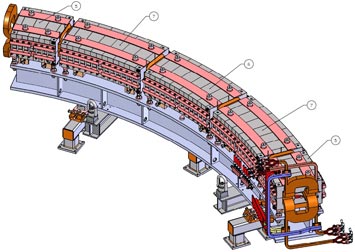 An engineering schematic of the curved magnet girder holding three full-length and two half-length magnets. After successful testing, five more will be built to the same specifications and assembled to form the ends of the prototype accelerator.

The team turned to the world-renowned expertise of Brookhaven’s Superconducting Magnet Division. There, physicist Animesh Jain and engineer Piyush Joshi will perform a series of physics and engineering measurements. They’re designing a specialized apparatus to measure the magnetic fields—how much magnetic field the magnets produce, with what spatial quality, for a given amount of current.

“The field is not the same as you move across the magnet,” Jain said. “Some parts of the iron see higher field, and some see lower field.” The smooth change of field is what produces the focusing, but the field quality—the smoothness—should remain constant during the cycling of the magnet.

Testing for all of these effects is complicated by the curved shape of the magnets, and the small size of the aperture through which the beams will travel. In straight magnets, the team would ordinarily insert a cylindrical probe and rotate it to measure changes in the magnets’ field strength and quality. For this work, “we had to design a curved probe,” said Jain.

Six curved magnet girders will be incorporated into a "racetrack" shaped accelerator—three on each end for turning the beam. The straight sections will incorporate additional equipment for injecting, accelerating, and extracting the ion beams.

Fortunately, the cycling nature of the magnets changes the field, eliminating the need to rotate the custom probe—which would have been impossible. “Still we have to measure the field at several points across the aperture so we know how smoothly the field changes, and how consistent it is,” Jain said. “The combination of the bending and focusing functions makes the field depend on where you place the probe, so the instrument has to be aligned with high precision.”

For now the team will test each focusing and defocusing magnet on the girder assembly individually. There will also be tests of the state-of-the-art power supply systems and many other magnets in the accelerator.

“Ultimately we need to be sure these components are all operating in sync to get them to operate as an accelerator—the way perfect music is generated by harmonious and synchronized playing of instruments in an orchestra under the centralized, seemingly effortless control of the conductor,” Joshi said. 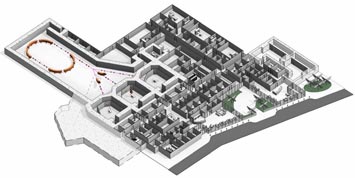 Once installed in a hospital setting, the accelerator will have beam transfer lines that deliver precision ion beams to patients in individual treatment rooms.

The development of the iRCMS and testing being performed at Brookhaven are funded entirely by Best Medical International. But the technology behind this project is a direct outgrowth of the U.S. Department of Energy’s long-term support for basic physics research. Said Peggs, “It is stimulating and rewarding to turn the same techniques and ideas to a different challenge.”

Best Medical International, Inc., a medical device company established in Springfield, Virginia, USA, in 1977, is an innovative leader in the development of radiation therapy and diagnostic products with offices and manufacturing operations around the world.