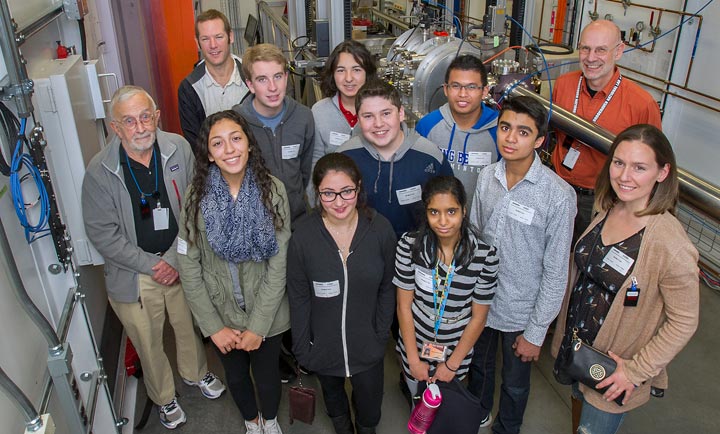 It’s not an average school day when you visit one of the most advanced synchrotron light sources in the world. Students in 10th, 11th, and 12th grade from Long Beach High School and Bayshore High School got just that opportunity when they met with scientists and post-doctoral scientists at the National Synchrotron Light Source II, an Office of Science User Facility at the U.S. Department of Energy’s Brookhaven National Laboratory that produces extremely bright x-rays for all kinds of scientific research.

At NSLS-II, the students met Juergen Thieme, the group leader for the Submicron Resolution X-ray Spectroscopy (SRX) beamline. His overview of the facility and the SRX beamline focused on geosciences and soil research. He described the techniques used at the beamline – fluorescence, which determines the elemental makeup of a sample; spectroscopy, which shows how elements are bound together – and how scientists who use the beamline combine these techniques to learn the chemical and physical properties of a material on very small scales.

“At one thousandth of a millimeter – on the micron scale – you have the place where chemistry happens,” he told the students.

The students then met a visiting scientist who is using the SRX beamline to examine soil samples. Dean Hesterberg, a professor of soil science at North Carolina State University, smiled at the group and wryly asked, “It’s just dirt, right?” Not exactly, as he pointed out, showing the high schoolers spectroscopic images taken at the beamline just moments before. The images indicated clusters of zinc and other elements. “We need to know how soil works, how it moves elements and minerals through the earth. This is important because toxins can leech from soil into crops and get into our foods,” he said.

Hesterberg was working at SRX with two post-doctoral students, who also spoke with the students about their work. Aakriti Sharma was just as in awe of the facility as the high school students were. “It’s my first time at a synchrotron, and the work here is fascinating,” she said. “I’m looking at one sand grain at a time, but it’s so important, because my research could be influencing decisions about soil management in the future.”

The high schoolers, who visited NSLS-II with their Fundamental Science Research class, were intrigued and inspired.

“I found this visit to be humbling. I didn’t know what to expect,” said Vinny, a 10th grader from Long Beach High School. “It’s a cool opportunity to see what goes on outside school, to see how scientists do their jobs and how they get to try things on their own.”

Some of the students in the class are interested in going on to jobs as scientists or sustainability experts, while a few have other aspirations. All were impressed with their experience at a National Laboratory.

“Our class focuses on the process of science,” another student said. “It’s really neat to see it in action.”

Their teachers, part of the Long Island Consortium of Research Educators on Energy and the Environment (LICORE3), coordinated the visit with Keith Jones, senior scientist emeritus at Brookhaven, who first came to the Lab as a student himself in 1949. The Consortium grew out of a multi-year collaboration between Jones and teachers concerned with energy and environment topics related to Long Island to encourage students to pursue interests in science, technology, engineering and mathematics (STEM).

“The goal of the group is to inform all students about regional environmental and energy issues, and to give them an opportunity to do research projects at facilities such as NSLS-II,” Jones said. “We’re also developing a website as a central repository for results of the student efforts so that student work can be integrated with work going on by community groups, government agencies, and other research institutions.”

The visit of students from Bayshore and Long Beach is the first step in moving student involvement in energy research at the previous Brookhaven light source – the National Synchrotron Light Source (NSLS) – to the new, much bigger and brighter NSLS-II facility. These DOE Office of Science User Facilities are designed to serve thousands of researchers who come to Brookhaven to conduct experiments each year.