Boosting Production of Radioisotopes for Diagnostics and Therapeutics 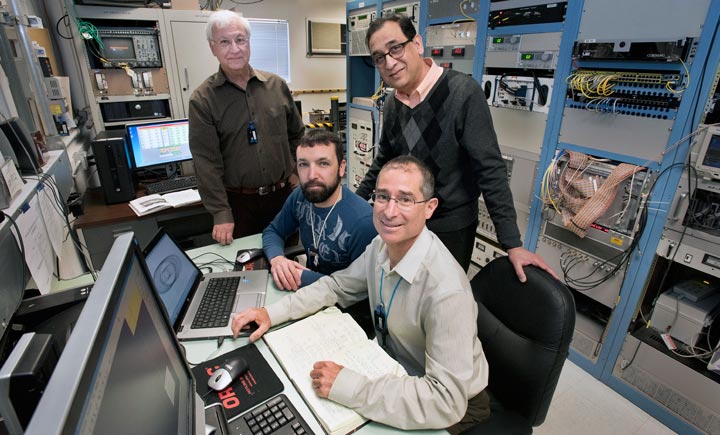 In the Brookhaven Linac Isotope Producer (BLIP) control room, (clockwise from back) Leonard Mausner, Deepak Raparia, and Robert Michnoff, who worked on the upgrade efforts, and Jason Nalepa, a BLIP operator, inspect recent changes to the raster beam profile. A live plot of the rastered beam, as measured with the new beam position monitoring system, is shown on the laptop screen. The small and large radii are visible. The electronics for the raster system are installed in the equipment racks seen in the background.

From imaging blood flow to the heart and other vital organs, to tracking the progression of bone disease, to destroying cancer cells, radioisotopes—radioactive forms of chemical elements—are used in the diagnosis and treatment of a variety of illnesses and diseases.

Yet certain medically useful isotopes can only be produced by nuclear reactions that rely on high-energy particle accelerators, which are expensive to build and operate. As such, these isotopes are not typically available from commercial vendors. Instead, they are produced at facilities with unique capabilities, like the national labs built and funded by the U.S. Department of Energy (DOE).

The DOE Office of Science’s Nuclear Physics Isotope Development and Production for Research and Applications program (DOE Isotope Program) seeks to make critical isotopes more readily available for energy, medical, and national security applications and for basic research. Under this program, scientists, engineers, and technicians at DOE’s Brookhaven National Laboratory recently completed the installation of a beam raster (or scanning) system designed to increase the yield of critical isotopes produced at the Brookhaven Linac Isotope Producer (BLIP), the Lab’s radioisotope production and research facility, in operation since 1972.

The new raster system became operational in Jan. 2016 and is contributing to increased production of strontium-82 (Sr-82), an isotope used for cardiac imaging, and to research and development of actinium-225 (Ac-225), an isotope that may be a promising treatment for targeting many forms of cancer, including leukemia and melanoma.

BLIP produces isotopes by directing a high-energy (up to 200 million electron volts), high-intensity narrow beam of protons at a water-cooled array of several target materials. When the protons collide with the target materials, a reaction occurs, producing radioactive products in the target.

More than one isotope is being produced at any given time, so multiple targets are hit with the beam. As the beam passes through the first to last targets, its energy decays. The targets are lined up in an order that maximizes production of the desired isotopes: the targets needed to produce isotopes requiring higher energy are put in the front of the array.

A small fraction of each of the products is the desired isotopes, which can be extracted and purified through chemical processing conducted inside lead-enclosed “hot” cells at Brookhaven Lab’s Isotope Research Processing Laboratory. Inside these hot cells, which are designed for safely handling radioactive materials, the irradiated targets are cut open and their contents are dissolved to separate out the desired isotopes. Personnel use manipulators to remotely handle the radioactive material. The isotopes are then shipped in specialized containers to suppliers, who distribute them to hospitals for medical use or to universities for ongoing research.

What makes BLIP unique is its high-energy capacity. “A minimum of 70 million electron volts is required to make Sr-82,” explained Leonard Mausner, the head of research and development and facility upgrades within Brookhaven Lab’s Medical Isotope Research and Production Program.

Mausner proposed both the new beam raster system and a complementary effort to increase the beam intensity of the Brookhaven Linear Accelerator, or Linac, which provides the beam used at BLIP. “To date, there are no commercial accelerators in the United States with the power required to produce this critical isotope used to image 300,000 patients per year,” said Mausner.

However, the targets’ ability to handle BLIP’s high intensities has, until now, been largely hindered by the way the beam was positioned on the target. The beam, which significantly heats up the target, had always been narrowly focused on a single area of the target. As a result, the targets—such as the rubidium chloride (RbCl) used to produce Sr-82—became very hot only in the region of highest beam intensity.

“The beam pulse, which is 450 microseconds long and happens every 150 milliseconds, would hit the targets in the same exact spot 24/7 over a period of weeks, potentially damaging the targets when high beam current was applied,” explained Robert Michnoff, project manager for the BLIP beam raster system and an engineer in Brookhaven Lab’s Collider-Accelerator Department.

“Because the RbCl target was being heated unevenly, a small molten zone would form, then expand and push out into the cooler outer edges of the target area, where the material would solidify,” said Mausner. “We want the target fully solid or fully molten, as a uniform density may improve isotope yield.”

Uneven heating causes the density of a target to vary across its diameter. As a result, the energy of the beam exiting the target will also vary across this diameter, impacting the energy that enters the next target in the array.

“The distribution in beam energy increases as it travels through one target to the next, making it difficult to assess how much energy is transferred. We want to optimize production of isotopes in the downstream targets,” said Cathy Cutler, director of Brookhaven Lab’s Medical Isotope Research and Production Program.

But, rapidly sweeping the beam in one circular motion is not enough to uniformly distribute the beam across the target. “The beam intensity pattern would resemble a donut or a volcanic crater—a circle with a hollow center,” said Mausner.

Instead, the beam is moved in a circular pattern at two different radii, essentially creating a larger and smaller circle. The radius values and the number of beam pulses for each radius can be programmed to optimize beam distribution.

“The rastering pattern allows us to achieve near-uniform beam current density on the target,” said Michnoff, who mentioned plans to test a “middle” radius, which may help to provide even better beam distribution.

In a complementary effort to the BLIP raster upgrade, the scientists worked to increase the beam intensity of the Brookhaven Linac by optimizing operating parameters of the hydrogen ion source, neutralizing the electric charge generated by the beam, and increasing the length of the beam pulse by placing the beam earlier in the radio-frequency pulse used to accelerate the ions.

“At higher currents, the beam’s electric charge causes the beam to spread out, resulting in defocusing of the beam and ultimately a loss of current. We use Xenon gas to neutralize that charge,” explained Deepak Raparia, head of the linac pre-injector system, project manager of the linac upgrade, and a scientist in Brookhaven Lab’s Collider-Accelerator Department. “By increasing the length of the beam pulse, we can deliver more beam current to the BLIP target station and thus increase the quantity of isotopes produced.” 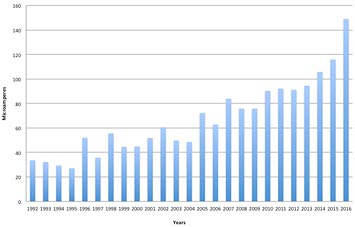 In 2015, the Brookhaven Linac’s beam intensity was increased from 115 to 147 microamps, surpassing the initial project goal of 140 microamps. After the raster system was commissioned in 2016, the beam was further optimized, achieving 165 microamps.

According to Mausner, yield could rise significantly at this higher intensity: “If the beam current can be maintained at 165 microamps, production levels could potentially increase by 40 percent.”

In a second proposed phase of the Linac upgrade, the Brookhaven team hopes to double beam current by doubling the beam pulse length from 450 to 900 microseconds. Accelerating and extracting significantly more beam current out of the linac and transporting that current to BLIP will require the linac’s radio-frequency system and beam-focusing elements to be upgraded. “These upgrades will increase the duration of accelerating and focusing fields to cover the entire beam pulse,” said Raparia.

The capability to handle higher and higher beam intensities without targets failing not only increases the yield of routinely produced medical isotopes, such as Sr-82, but also enables scientists to investigate other promising isotopes for medical and other applications.

Among these isotopes is Ac-225, a short-lived alpha emitter—it quickly releases a high amount of energy in the form of alpha particles that can only travel short distances. As such, Ac-225 has the ability to destroy targeted cancer cells without destroying healthy surrounding tissue. Traditionally, Ac-225 has been produced through the natural decay of thorium-229 from uranium-233, which is not readily available and has an extremely long half-life, or rate of decay.

In collaboration with Los Alamos National Laboratory and Oak Ridge National Laboratory, Brookhaven Lab has been developing an accelerator-based capability to scale up the production of Ac-225, the demand for which is 50 to 100 times greater than the current supply.

Scientists from all three laboratories are working to develop a new Ac-225 production approach in which readily available thorium metal targets are bombarded with high-energy protons. Initial experiments demonstrated that an irradiation lasting less than a week’s time could produce the annual quantity of Ac-225 currently in supply. “The raster system will ultimately aid us in the research and development of Ac-225, which could eventually be manufactured into an active pharmaceutical ingredient used in cancer therapy,” said Mausner.

However, before Ac-225 can become a routine medical isotope, several challenges must be overcome.

“Hundreds of isotopes are produced when thorium is hit with protons, so it is difficult to separate out Ac-225 during chemical processing of the target,” explained Mausner.

A small number of clinical cancer treatment trials are ongoing using the currently limited supply of Ac-225. Initial results indicate that Ac-225 has the potential to put terminal cancer patients with acute myeloid leukemia, a cancer of the blood and bone marrow, into remission.

“The increased beam intensity, coupled with this new raster system, will enable higher production levels of desirable radioisotopes for the nuclear medicine community and industry, and will increase the number of patients who could benefit across our nation,” said Mausner.