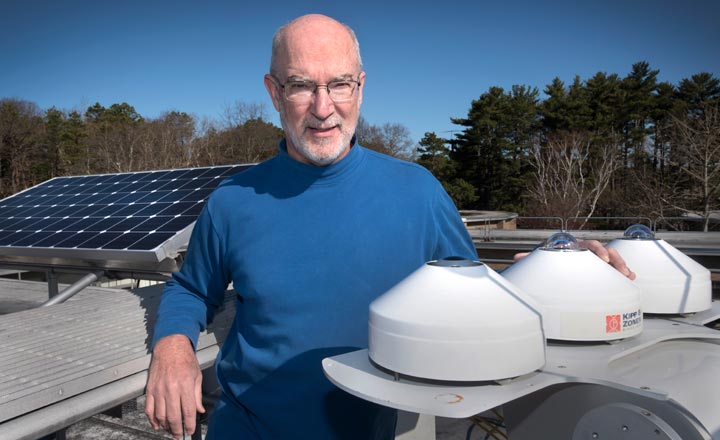 More than seven billion people live on Earth today, and together we are consuming increasing amounts of energy. Earth's atmosphere now contains unprecedented levels of carbon dioxide, the oceans are becoming increasingly acidic, and nine of the 10 hottest years on record occurred in the past 15 years.

With those factors in mind, and too many others to list, just what will Earth be like in 50 years? What will it be like for us, for flora and fauna, and for current and future coastal communities?

Scientists from Brookhaven Lab and other institutions around the world are collecting vast amounts of data and developing models of Earth's complex climate systems to increase the accuracy of future projections. But before forecasting Earth's climate in 2066, ready the Wayback Machine, DeLorean, or any other time-traveling contraption for a journey to the years just before the first Earth Day: to the 1960s, when city skylines disappeared in smog, fires raged on oozing polluted rivers, and bald eagle populations in North America plummeted. Then take a deep breath—knowing they recovered, thanks to direct outcomes from that first Earth Day in 1970—and prepare for the challenges we face today.

Join Ernie Lewis of Brookhaven Lab's Environmental & Climate Sciences Department for the 514th Brookhaven Lecture, an Earth Day-themed talk titled "What Will Earth Be Like in 50 Years?" in Berkner Hall at 4 p.m. on Wednesday, April 20—two days before Earth Day 2016. All are invited to this free talk, which is open to the public. Refreshments will be offered before and after the lecture. Visitors to the Lab 16 and older must carry a photo ID while on-site. Add to calendar

Lewis will begin his talk by examining the current health of Earth's climate and environments. Following a brief "tour" through the years leading up to the first Earth Day, he will then discuss lessons learned and Brookhaven Lab scientists' research that may be applied, today and in the future, to determine what Earth will be like 50 years from now.

To join Lewis for dinner at a restaurant off site after the talk, contact Sharon Zuhoski (Ext. 3359).

Lewis is an atmospheric scientist at Brookhaven Lab, where he focuses on exploring the properties of aerosols—microscopic particles in the atmosphere that water droplets condense around as clouds form. He earned a bachelor's degree from California Institute of Technology in 1979. He was a scientist for Boeing from 1980 to 1981 while studying fluid dynamics and applied mathematics at the University of Washington. He then earned a diploma in fluid dynamics at The von Karman Institute for Fluid Dynamics in Belgium in 1982, before his time in the Department of Physics at the University of Texas at Austin from 1982 to 1990, when he was a research and teaching assistant, and completed all but a dissertation in theoretical physics. Lewis also taught mathematics at Austin Community College from 1987 to 1993. Lewis arrived in Brookhaven Lab's former Oceanography Department in 1994, before becoming a member of the Environmental & Climate Sciences Department in 1998.