Lawrence Lettieri, a senior technical specialist in the Environmental and Waste Management Services Division, performs on-site environmental testing on the job, but, during a week's vacation in February for each of the last two years, he used different skills - in construction - working as a volunteer. Lettieri helped to rebuild homes that were devastated by Hurricane Katrina in New Orleans, Louisiana, and Biloxi, Mississippi. 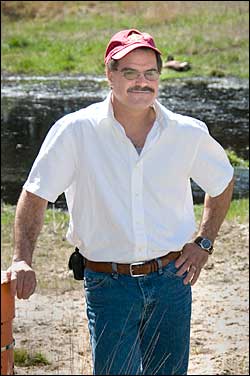 "Some people ask me why I would spend my vacation time working," Lettieri said. "It depends how you define 'vacation.' For me it means spending time away with family and friends. I went to Mississippi in 2007 and to New Orleans this year with my brother and nephew to help out Hurricane Katrina victims who lost their homes. I spent time with my family, made many new friends, and had fun while I helped others. That's a great vacation for me."

The Trinity Lutheran Church of Rocky Point has organized the annual volunteer effort since Hurricane Katrina hit the Gulf Coast and several southern inland areas in August 2005. Katrina was the costliest and one of the five deadliest hurricanes in U.S. history. Lettieri said that even now, thirty months later, much devastation remains, and, in some cases, entire communities are still closed.

The church sent a group of more than 50 volunteers to each location to help rebuild homes. Most of the travel expenses for the volunteers were paid through the church's fundraising, and building materials were either donated outright or bought with donated funds.

Lettieri and other volunteers put up insulation and sheetrock and did spackling in three homes. Since Lettieri worked in construction before he joined the Laboratory in 1992, he has experience in those areas, but he said that volunteers do not have to be experts in construction, just have the desire to help. They can be taught the necessary skills.

"I met the owners of the homes I was helping to rebuild," said Lettieri. "That was gratifying for me, and they were very grateful for the help of the volunteers. Although they have relocated elsewhere, many people still want to come back to their original homes."

He added, "I've always volunteered in various organizations, such as the Girl Scouts and local youth organizations, since my two children were very young, and I have always found it rewarding. They are both college-age now, but I intend to keep on volunteering. I'm already planning my next trip to New Orleans with my brother's church group in February 2009."