Chemists Kotaro Sasaki and Kurian Kuttiyiel with their fuel cell catalyst samples. On the computer screen is a transmission electron microscopy image of the core-shell nanoparticles (upper right) and the chemical mapping of the nanoparticles (left and bottom right), demonstrating the outer platinum shell and the inner core of nitrided nickel. Miomir Vukmirovic and Zhixiu Liang, also of the Surface Electrochemistry and Electrocatalysis Group, are in the background.

Chemists at the U.S. Department of Energy’s (DOE) Brookhaven National Laboratory had answers to an issue vexing the alternative energy automotive industry—how to make hydrogen fuel cells less expensive and more efficient. To begin the process of getting their findings out of the laboratory and into actual cars, they needed the help of someone with expertise in transferring discoveries from the laboratory to the marketplace.

With the guidance of Brookhaven Lab’s Technology Transfer Office, the scientists coordinated a strategy for submitting proposals to the Technology Commercialization Fund, a DOE funding opportunity aimed at expanding the commercial impact of research and development projects conducted at national laboratories.

The scientists’ and Technology Transfer Office’s hard work paid off. The two Brookhaven chemistry projects received $100,000 each to further develop their innovative catalysts and fuel cell manufacturing processes. When ready, the researchers will work in partnership with automotive manufacturers to test the catalysts.

“These wins are in large part attributable to the efforts of Poornima Upadhya from the Technology Transfer Office, as well as the good ideas and patents from the researchers,” said Alex Harris, chair of Brookhaven’s Chemistry Department.

What are fuel cells?

“Hydrogen fuel cells are an enticing, environment-friendly technology because they emit nothing but water vapor—meaning no carbon dioxide emissions—while promising a fast refill for long-distance driving, like a gasoline-fueled car,” said Harris.

The Brookhaven Lab Chemistry Department projects, led by Kotaro Sasaki and Miomir Vukmirovic, may improve the catalysts and electrodes that drive the chemical reactions inside the cells.

While several auto companies already have fuel-cell-powered models on the roads, the high cost of materials needed to make the fuel cells work has limited production to just thousands of vehicles. These high cost materials are the catalysts required to convert hydrogen fuel and oxygen into water and electricity. The most efficient catalysts contain platinum, an expensive metal often used for wedding rings.

The Brookhaven chemists had ideas about how to solve this dilemma. Instead of solid platinum, they made catalysts using tiny nanoparticles of a less expensive material surrounded by a thin platinum shell. This core-shell design reduces costs, improves catalytic activity, and decreases corrosion of the catalyst from the highly acidic environment created by the chemical reactions within the fuel cells.

Still, there is room for improvement. 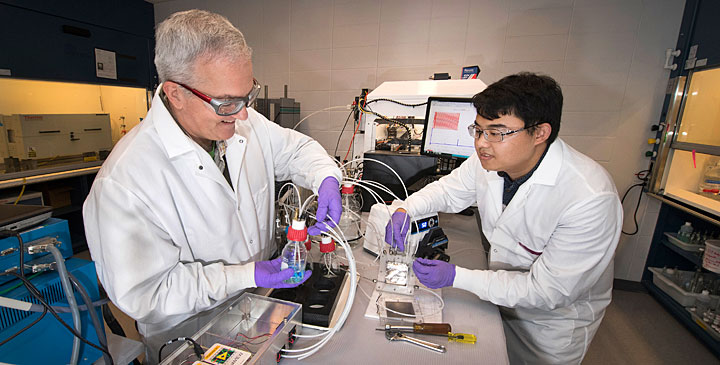 Kotaro Sasaki’s team is developing cores made from different nitride metals and alloys to replace the palladium used in the team’s initial designs. By using these even less expensive, corrosion-resistant materials in the nanoparticles’ cores, the researchers have created catalysts with both higher activity and stability than commercial platinum catalysts.

At the same time, Miomir Vukmirovic’s team has found a way to reduce the cost of electrode manufacturing with a semi-automated electrodeposition technique for the catalytic electrodes. The scientists developed this method for making tungsten-nickel core catalysts, and found that the unconventional preparation method simplified electrode production. It combines several steps of the manufacturing process, thereby reducing the cost of fuel cells.

Now each team, with the help of the Technology Transfer Office, will find private partners to test their approaches and provide feedback on how the technologies fit with the market’s needs. The groups will also collaborate with other national laboratories, particularly Los Alamos National Laboratory, to provide feedback on the catalyst activity and durability. If these partners—and potential consumers of the products—approve of the performance, it will attract future investors to commercialize the Brookhaven teams’ projects.

For potential partners, Sasaki points to automotive companies such as General Motors and Toyota—two groups that have collaborated with the researchers for years. There also may be interest from industrial catalyst suppliers—one of whom already licensed one of the group’s previously developed platinum technologies.

The validation from the reviewers at the DOE’s Technology Commercialization Fund will help the Brookhaven team move closer to their goal of moving their technologies from benchtop to blacktop.

“I am totally delighted to receive the funding, which will be used to help transition these catalysts to commercial viability,” Sasaki said.

Vukmirovic agrees. “This award recognizes that our effort may result in viable technology for future large-scale fuel cell production,” he said. “The awards are especially significant since Sasaki’s project and mine are members of the same larger group, Surface Electrochemistry and Electrocatalysis, led by Radoslav Adzic, who pioneered the core-shell electrocatalyst strategy.”

Even though he believes both projects are excellent, Vukmirovic wondered, “What was the probability that two projects from the same group would be awarded? The DOE must really believe in what our group is doing!”

If you think your project could be further developed with an industry partner, contact the Office of Technology Commercialization and Partnerships.