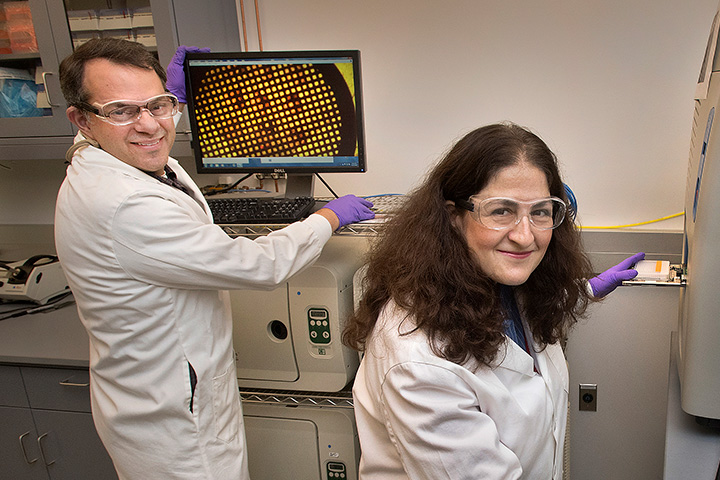 At any given time, some cells in your body are dying, others are humming along, some are just beginning to form, and every single one is operating according to unique proteins following the instructions coded in your DNA. Some proteins help your antibodies fight off bacteria that make you sick, some influence how you taste food, and others are vital in repairing DNA damaged by chemical compounds and radiation from the sun.

All proteins' functions are influenced by their make-up and form, or "structure," and the Worldwide Protein Databank currently contains documented structures for almost 130,000 proteins scientists have "solved" to decode mysteries of genetics, improve human health and our ability to fight off diseases, and much more. Today at the U.S. Department of Energy's Brookhaven National Laboratory, the Life Science and Biomedical Technology Research Resource (LSBR) team is working to significantly increase the number of structures solved and learn far more about the proteins that affect our lives and our world in so many ways. Led by Brookhaven scientist Sean McSweeney, the LSBR team currently consists of 24 members, including Alex Soares, who began mentoring term-research associate Amy Reichel in September with support from the Human Resources Directorate's Diversity Office.

For decades, researchers have solved proteins' structures by analyzing samples "grown" in crystals that contain large quantities of proteins in regular, repeating patterns. Research facilities and tools like the now-decommissioned National Synchrotron Light Source (NSLS) at Brookhaven Lab were revolutionary for studies in structural biology. At NSLS-II—a DOE Office of Science User Facility at Brookhaven Lab, where the LSBR team is based, with x-rays 10,000 times brighter than its predecessor—and other facilities around the world, research capabilities are growing for scientists to push advancements further.

"The crystals we use to study proteins are difficult and time consuming to produce, so the LSBR team is developing new tools and techniques for experiments that require samples approximately 1,000 times smaller than those used for conventional techniques," Soares explained.

These miniature-sized samples, however, are too small for human hands to handle, so the team is working with an "acoustic droplet ejection" (ADE) system in which sound waves act like microscopic hands that gently guide and assemble biological building blocks. The same sound-based ADE system used to assemble miniature samples can then pulse sound waves that cause the tiny crystal samples in liquid droplets to "rain up" from their source into an x-ray or electron beam for analysis.

As the time-consuming process of preparing and loading samples is automated with this ADE system, scientists can collect large quantities of data with extreme precision and efficiency from samples loaded into a cartridge and then ejected with those pulsed sound waves one by one.

Soares often welcomes interns and some others with science backgrounds to join in ongoing research so they can gain hands-on experience contributing to world-class science. Since joining Brookhaven in 2001, he has mentored 48. Soares' current mentee is Amy Reichel, who won first place in the nationwide Westinghouse Science Talent Search in 1981 and studied physics at Harvard University before going on hiatus. Reichel is a research associate with a term appointment at the Laboratory that continues until January 2017. Today, with Soares' guidance and support from Brookhaven Lab's Diversity Office, she is helping to solve problems and demonstrate that the ADE system can be used to miniaturize and automate experiments with electron microscopy techniques to visualize proteins.

"Working with Alexei Soares has opened my eyes to new scientific disciplines, where I can leverage my skills and interests for applications at Brookhaven and elsewhere," Reichel said. "It's just so exciting for me to contribute to developing tools and techniques that will help scientists get results more efficiently."

"Amy Reichel, with her unique abilities, provides talent, commitment, and a passion for science. We are grateful to everyone—Sean McSweeney and Alexei Soares, in particular—for doing what they've done and continue to do to welcome and support her as part of the team," Kendall added.