Dark Interactions Workshop Hosts Physicists from Around the World

Dozens of experimental and theoretical physicists convened at the U.S. Department of Energy’s Brookhaven National Laboratory in October for the second biennial Dark Interactions Workshop. Attendees came from universities and laboratories worldwide to discuss current research and possible future searches for dark sector states such as dark matter. 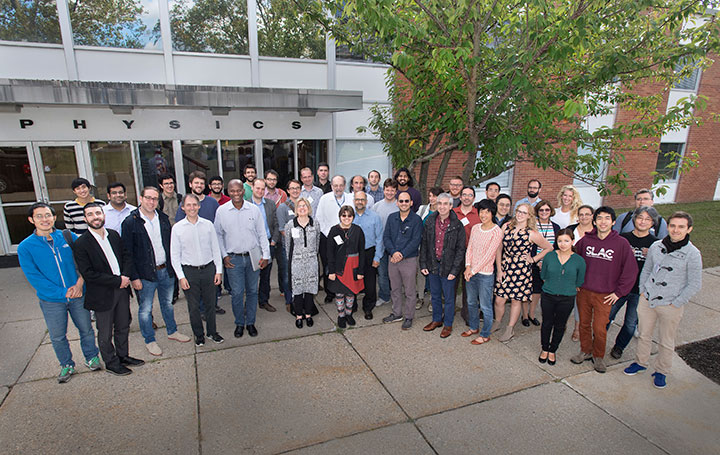 Two great cosmic mysteries – dark energy and dark matter — make up nearly 95% of the universe’s energy budget. Dark energy is the proposed agent behind the ever-increasing expansion of the universe. Some force must propel the accelerating rate at which the fabric of space is stretching, but its origin and makeup are still unknown. Dark matter, first proposed over 80 years ago, is theorized to be the mass responsible for most of the immense gravitational pull that galaxy clusters exert. Without its presence, galaxies and galaxy clusters shouldn’t hang together as they do, according to the laws of gravity that permeate our cosmos.

Scientists know this much. It’s a bit like a map of a continent with the outlines drawn, but large holes that need a lot of filling in. “There are a lot of things we know that we don’t know,” said Brookhaven physicist Ketevi Assamagan, who organized the workshop along with Brookhaven physicists Hooman Davoudiasl and Mary Bishai, and Stony Brook University physicist Rouven Essig.

The Dark Interactions Workshop was created to gather great minds in search of answers to these cosmic questions, and to share knowledge across the many different types of experiments searching for dark-sector particles. “The goals are to search for several well-motivated dark-sector particles with existing and upcoming experiments, but also to propose new experiments that can lead the search for dark forces in the coming decade. This requires in-depth discussions among theorists and experimentalists,” Essig said.

The sessions ranged from discussing theories to status updates from dark-particle searches following the first workshop two years ago. Attendees included post-docs as well as tenured scientists, and Assamagan said workshops like this are crucial for allowing a diverse and somewhat disparate group of scientists in a dense field of study to get to know each other’s work and build collaborations.

“Dark matter is one of the hot topics in particle and astrophysics today. We know that we don’t have the complete story when it comes to our universe. Understanding the nature of dark matter would be a revolution,” Assamagan said.

While tantalizing theories have directed physicists to build new ways to search for dark sector states, conclusive evidence still eludes scientists. “Since there is currently a vast range of possibilities for what could constitute the dark sector, a variety of innovative approaches for answering this question need to be considered,” Davoudiasl said. “To that end, meetings like this are quite helpful as they facilitate the exchange of new ideas.”

“There’s still a lot of hope. Meetings like this one show that there are a lot of clever people working in this field and a lot of collaboration between them. Hopefully at our next workshop, we’ll be sharing evidence that we’ve discovered something of the dark sector,” said Assamagan.