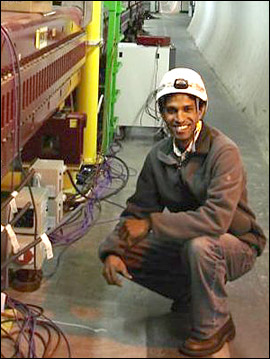 Accelerator physicist Rama Calaga is one of six new bloggers on a website dedicated to covering the activities of U.S. researchers at CERN's Large Hadron Collider (LHC). In a few weeks, Calaga will also be one of the newest additions to BNL. He joins four veteran bloggers - including Brookhaven physicist Peter Steinberg - on the US LHC website, where discussions range from the challenges and complexities of LHC computing to the food served in CERN's cafeteria.

For the past two years, Calaga has represented Brookhaven at the LHC in Switzerland, as part of a Toohig Fellowship sponsored by the U.S. LHC Accelerator Research Program (LARP). LARP is a collaborative initiative of the U.S. Department of Energy's Division of High Energy Physics and several national laboratories, including BNL. On June 1, he officially joins the Laboratory as an assistant physicist, but he will remain at CERN until September to focus on LHC commissioning and upgrade projects.

"I have the luxury of working for an American lab while stationed here, which, along with the vast span of accelerator physics at the LHC, gives me a lot of freedom" Calaga said. "The LHC has a setup unlike any other machine in the world, and I'm pretty much free to jump into anything that interests me."

Calaga, who received his Ph.D. in physics from Stony Brook University in 2006, already has a strong relationship with BNL. He performed his doctoral research under Brookhaven researchers Ilan Ben-Zvi and Steve Peggs. His resulting thesis on beam dynamics and high-current superconducting radiofrequency cavities at BNL's Relativistic Heavy Ion Collider (RHIC) received a Doctoral Research Award from the American Physical Society.

"If I were to sum up my experience at RHIC in one word, it would be 'invaluable,'" he said. "There are people who have been working at CERN for many years but they have never been part of an active control room. You can train for something, but you have to sit behind the wheel to really do it. I am happy that CERN physicists recognize my experience at RHIC and value my contributions toward the LHC."

The 10 US-LHC bloggers represent scientists from U.S. institutions working at CERN and in the United States at all levels - from graduate students to university professors. You can read the bloggers' posts, or learn more about them on the US LHC website.