Meet Stephanie Majewski...and Follow Her Journey to the LHC 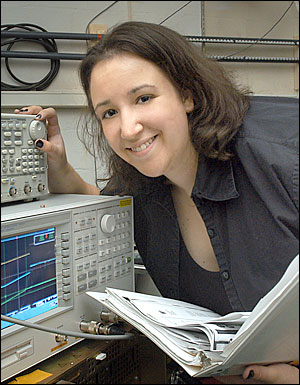 Stephanie Majewski will need much more than a carry-on as she packs for her next trip. As she prepares to live and work in Switzerland for a year, Majewski, a postdoctoral researcher in Brookhaven's Physics Department, is steadily crossing items off a massive checklist:

Majewski is part of the ATLAS collaboration at CERN's Large Hadron Collider (LHC), which will be the world's most powerful particle accelerator when started up on September 10. ATLAS, one of two massive general-purpose detectors, may help scientists unravel some of the deepest mysteries in particle physics such as the origin of mass or the identification of dark matter. Majewski will join the action on September 8 when she leaves for CERN, located just outside of Geneva, Switzerland, on the French border.

"At Brookhaven, I'm starting to become involved with getting the detector up and running, but the excitement doesn't compare to actually being there when it starts up," Majewski said.

Specifically, Majewski's job focuses on making sure that the ATLAS liquid argon calorimeter - a central piece of the detector - is correctly measuring the particles produced from the LHC's extremely energetic proton-proton collisions. At CERN, she'll take "shifts" in the control room to monitor incoming data and pinpoint possible technical problems with the detector. She'll also serve as an additional liaison for the ATLAS group working on site at Brookhaven, providing details and observations about the detector and the experiment itself.

"As I tell people about my move, I've been surprised by how many of my colleagues say 'Oh, I spent a year at CERN, too,'" Majewski said. "It seems like a rite of passage for particle physicists. I've been looking forward to this for a long time now."

Majewski, who received her Ph.D. in applied physics from Stanford University in 2007, was originally interested in a career in computer science or chemistry. But after introductory physics classes at the University of Illinois, some reading about dark matter and the Higgs boson - the particle suspected to give objects mass - and an inspiring teacher's assistant, particle physics managed to capture her imagination.

"I really like gadgets and new technology in general, and particle physics is the epitome of cutting edge," Majewski said, adding that the ATLAS detector is essentially one giant gadget. "It's a huge engineering feat and amazing in itself, outside of all the amazing things we're going to see coming out of the LHC."

Of course, there are perks to living in the middle of Europe that don't involve a laboratory, and Majewski plans to experience it all.

"Paris, Prague, fondue, raclette, coffee, chocolate, wine - I'm looking forward to it all," said Majewski, who is considering joining the CERN ski club and already has plans for Oktoberfest. "I just really want to absorb the culture."

To follow Stephanie's adventures overseas -- at the LHC and around Europe - check out her blog: http://stephatcern.blogspot.com/