New Mayor of Bellport a Lifelong Ambassador for the Lab 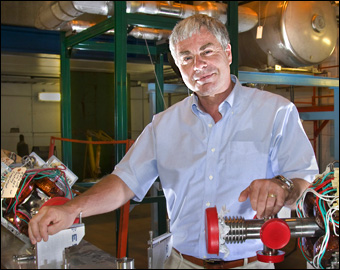 Brookhaven research associate and new Bellport Mayor David Pate is known to rise to a challenge. Whether installing feed-throughs for the ATLAS detector at CERN in Switzerland, or helping to set up the e-cooling facility here at RHIC, he has often been presented with just an empty building.

"I'm not afraid of start-ups," he said. "I can put together what's needed for a project to move forward. I'm a 'can do' sort of person."

Apparently, the Bellport Village board of trustees agreed, recently appointing Pate to fill the remainder of the final term of former Mayor Frank Trotta, who had served in the position for the past 25 years. Trotta resigned abruptly following some political infighting on the board. Pate, who had "feet in both groups," had served as chairman of the Bellport Village zoning board since 2004.

"I have no political alliances," he said. "I believe in democracy and in the process. And I believe that's why I was appointed."

Bellport's new mayor considers himself a "second-generation Lab brat." His father, Howard Pate, brought his family to Brookhaven from England in the '50s to work in instrumentation and health physics. While his son, who once headed up the RHIC vacuum group, has lived and worked elsewhere from time to time in the intervening years, he has found Brookhaven to be a good fit.

"My uncle, Brian Pate, started working at Brookhaven Lab in 1956," Pate said. "On his advice, my father loaded his family on a boat and said 'we're going to America.' My mom thought there would be cowboys and Indians here." The family lived in an apartment on site that still exists.

After six years with the Coast Guard, Pate attended Suffolk Community College, before moving to the New York Institute of Technology "on the 11-year program," while working at Brookhaven and later at the never-opened Shoreham Nuclear Power Plant. He came back to BNL in 1988 and has been here ever since, except for an 18-month stint at CERN starting in 2000. He returned to the Lab as a work control coordinator in the Collider-Accelerator Department. He is currently part of the Superconducting Accelerator and Electron Cooling Group, which is charged with the physics, design and construction of RHIC superconducting radio frequency accelerators and electron coolers and novel electron cooling techniques.

"I think I have always been an ambassador for the Lab," he said. "My job makes for interesting dinner conversation."

Pate has lived in and around Bellport for the past 50 years, graduating from Bellport High School in 1971. He always took an interest in village politics, and was appointed chair of the zoning board by the former mayor.

"Frank and I had a good working relationship," Pate said. "He knew I was independent and we had mutual respect. I have spoken to him and he's pleased that I was appointed. In politics, you can play in the field or you can be the batter. I guess it was time for me to be the batter."

Pate had a few weeks to discuss the opportunity with others, including his wife of five years, Beth, a special ed teacher at Eastern Suffolk BOCES in Westhampton, and his boss, Ilan Ben-Zvi.

"Ilan gave it his blessing," Pate said. "He thought it was a great opportunity."

Said Ben-Zvi: " "David is highly responsible. When he says he will do something, you can count it as good as done. His integrity is outstanding, and he knows how to stand his ground when he is sure he is right. As for his role as a mayor, he is very modest about it. Sure, we made a few jokes about how we should address him as the 'Honorable David J. Pate' or Mr. Mayor, but we quickly got used to it. I can easily see his value as a good mayor, given his integrity, technical expertise and responsibility. This is what you want in a mayor."

Pate said his priorities as mayor include staffing in key positions, streamlining the building department's processes, from construction applications to final inspection, and assessing the village's fiscal health. He said he has not decided whether to run for the office in June 2009.

"I will let the public make that decision when it gets closer to the election," he said.

While he is enthusiastic about his new political responsibilities, they have forced Pate to temporarily give up another love - flying. He learned to fly in the Coast Guard and is certified to pilot small private jets around the country. Before becoming mayor, it was not unusual for him to fly from White Plains to Detroit to South Carolina and back to Islip in time for lunch.

"Life is what you make of it, and I have done everything I ever wanted to do," he said. "When I was appointed mayor, my 86-year-old father said, 'You never stop amazing me.'"