A Nanowire with a Surprise

UPTON, NY - Scientists at the U.S. Department of Energy's Brookhaven National Laboratory and their collaborators have discovered that a short, organic chain molecule with dimensions on the order of a nanometer (a billionth of a meter) conducts electrons in a surprising way: It regulates the electrons' speed erratically, without a predictable dependence on the length of the wire. This information may help scientists learn how to use nanowires to create components for a new class of tiny electronic circuits. 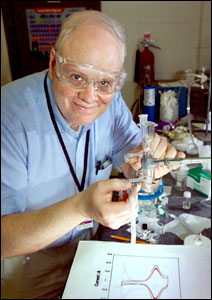 "This is a very unexpected and unique result," said John Smalley, a guest scientist in Brookhaven's Chemistry Department and the lead researcher of the study, described in the October 16, 2004, online edition of the Journal of the American Chemical Society.

The conducting chain molecule, or "nanowire," that Smalley and his collaborators studied is composed of units of phenyleneethynylene (PE), which consists of hydrogen and carbon atoms. Like the links that make up a chain, PE units join together to form a nanowire known as oligophenyleneethynylene (OPE). PE, and therefore OPE, contains single, double, and triple carbon-carbon bonds.

The double and triple carbon-carbon bonds promote strong electronic interactions along OPE such that it conducts an electric current with low electrical resistance. This property makes OPE nanowires good candidates for components in nanoelectronic circuits, very small, fast circuits expected to replace those currently used in computers and other electronics.

Smalley and his collaborators found that as they increased the length of the OPE wire from one to four PE units, the electrons moved across the wire faster, slower, then faster again, and so on. In this way, OPE does not behave like a similar nanowire the group has also studied, called oligophenylenevinylene (OPV), which contains single and double carbon-carbon bonds. When they made OPV wires longer, the electrons' speed remained the same. They observed the same result when they studied short wires made of alkanes, another group of hydrocarbon molecules that contains only single carbon-carbon bonds.

The researchers think that the unusual behavior of OPE may be due to its tendency to slightly change its three-dimensional shape. Increasing the wire's length may trigger new shapes, which may slow down or speed up the electrons as they cross the wire.

This variable resistance could be a benefit. "If the odd behavior is due to the conformational variability of the OPE wires, figuring out a way to control the tendency of OPE to change its shape could be useful," said Smalley. "For example, diodes and transistors are two types of devices based on variable electrical resistance."

The scientists made another significant finding: They dramatically increased the rate at which the electrons moved across the wire by substituting a methyl hydrocarbon group onto the middle unit of a three-unit OPE wire.

"Because OPE seems sensitive to this substitution, we hope to find another hydrocarbon group that may further increase the electrons' speed, and therefore OPE's ability to conduct electrons," said Smalley.

In the experiment, Smalley and his group created an OPE wire "bridge" between a gold electrode and a "donor-acceptor" molecule. To measure the electron transfer rate across the bridge, they used a technique they developed in which a laser rapidly heats up the electrode. This causes a change in the electrical potential (voltage) between the electrode and the donor-acceptor, which disrupts the motion of electrons crossing the bridge. The group used a very sensitive voltmeter to measure how quickly the voltage changed in response to the altered electron movement. From these measurements, they determined how fast the electrons were moving through the wire.

This research, performed in collaboration with Marshall Newton of the Brookhaven Chemistry Department and researchers at Stanford University, Clemson University, and Motorola, is funded by the Office of Basic Energy Sciences within the U.S. Department of Energy's Office of Science and the National Science Foundation.