Copper vs. Copper at the Relativistic Heavy Ion Collider

UPTON, NY - Scientists searching for evidence that a particle accelerator at the U.S. Department of Energy's Brookhaven National Laboratory has created a new form of matter not seen since the Big Bang and eager to study its properties have begun using a new experimental probe, collisions between two beams of copper ions. The use of intermediate size nuclei is expected to result in intermediate energy density - not as high as in earlier runs colliding two beams of gold ions at the Relativistic Heavy Ion Collider (RHIC), but more than was produced by colliding a beam of gold ions with much lighter deuterons.

"To completely understand the phenomena we are observing at RHIC, we have to look at what happens over a range of system sizes and collision energies," says Samuel Aronson, chair of Brookhaven's Physics Department and an experimenter at RHIC.

"The copper experiments will provide another control, or basis for comparison, that will help us understand how the new phenomena we are observing can be turned on and off, and under what conditions," Aronson says. 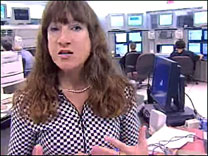 The run is expected to last for about 10 weeks, but depends on funding for fiscal year 2005.

At the same time, RHIC scientists are still analyzing more than a million gigabytes of data gathered since RHIC started collisions in June 2000, much of it from the most recent gold-gold run conducted in 2004. This data should help scientists describe in more detail the properties of the new form of matter being observed in the gold-gold collisions, and perhaps settle on how best to characterize it.

Built upon the foundation of an existing chain of accelerators at Brookhaven Lab, RHIC is actually two circular accelerators, 2.4 miles in circumference, capable of accelerating heavy ions to nearly the speed of light and creating collisions between these particles to help investigate the fundamental nature of matter. Through its collisions of gold ions, RHIC was designed to reproduce the hot, dense conditions of the early universe, in which it is postulated that the inner components of protons and neutrons - known as quarks - and the gluons that bind the quarks in ordinary matter would exist for a fleeting instant free from their normal confinement within protons and neutrons.

That is, the energy of the collisions was predicted to be sufficient to "melt" the protons and neutrons and produce a hot "soup" of free quarks and gluons, dubbed the quark-gluon plasma. By analyzing what happens in these collisions using four sophisticated detectors (BRAHMS, PHENIX, PHOBOS, and STAR), 1000 researchers from around the world are exploring the smallest, most fundamental bits of matter and how they interact.

To date, some of what has been observed at RHIC fits with what was expected of quark-gluon plasma, but some of the findings do not. So there has been considerable debate over whether the hot, dense matter being created at RHIC is indeed the postulated quark-gluon plasma, or perhaps something even more interesting.

Data already in hand show that the quarks in the new form of matter appear to interact quite strongly with one another and the surrounding gluons, rather than floating freely in the "soup" as the theory of quark-gluon plasma had predicted. Many physicists are beginning to use the term "strongly interacting quark-gluon plasma," or sQGP, to capture this understanding.

"The findings from the copper-copper run will provide some new answers - and perhaps some additional questions, as we move steadily from discovery to the full characterization of the new form of nuclear matter," says Thomas Kirk, Brookhaven's Associate Laboratory Director for High-Energy and Nuclear Physics.

RHIC is funded primarily by the Office of Nuclear Physics within the U.S. Department of Energy's Office of Science. Additional RHIC funders can be found here.