LOS ANGELES, CA - Flexible displays that can be folded up in your pocket? More accurate biological and chemical sensors? Biocompatible electronics? In research that may help determine the best materials for a wide range of future electronics applications, a scientist from the U.S. Department of Energy's Brookhaven National Laboratory will report on the intrinsic electronic properties of molecular organic crystals at the March 2005 meeting of the American Physical Society. Brookhaven materials scientist Vladimir Butko will describe the experimental techniques and key findings on Monday, March 21, at 3:42 p.m. in room 152 of the Los Angeles Convention Center. 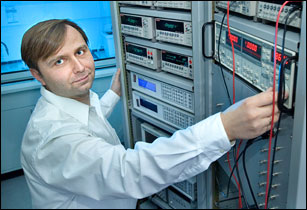 Organic materials are particularly attractive for potential applications such as flexible displays, or so-called "electronic paper," because they are inherently flexible. "Imagine a computer screen that you could crumple or fold like a sheet of plastic film," Butko says. Yet for this and any other electronics application, the materials must also be able to carry an electric current.

"These organic materials, by themselves, have almost no charge carriers - electrons or "holes" [the absence of electrons] - to carry current," Butko says. "They act as insulators. But if we inject charge carriers, we can sometimes create organic devices such as field-effect transistors [FETs], through which charge will flow."

To find out which materials have the best potential for carrying current, Butko has been studying single crystals of molecular organic materials such as pentacene and rubrene. Though these crystals themselves may not have direct applications, they provide the simplest form in which to study the materials' intrinsic electronic properties - unaffected by factors that might play a role in larger samples such as polycrystalline thin films.

The key, says Butko, is to know whether the injected charge carriers will have a high mobility or stay localized. The most stringent test of localization is to cool such a device to very low temperatures: somewhat close to absolute zero, which is approximately -273 degrees Celsius. At these low temperatures the mobility edge can be probed without the complication of thermal activation — a process that assists charge carrier transport in semiconductors due to large thermal energy at high temperatures. The studies were done using a physical properties measurement system (PPMS) and electrometers at the Los Alamos National Laboratory.

In his talk, Butko will present first evidence for low-temperature, quasi-temperature-independent transport of injected charge in a crystalline organic FET. "These materials, which also have the highest charge mobility at room temperature among organic FETs, can be most useful for electronic applications," Butko says.

Once scientists identify the best crystals, they will use thin-film methods to test their applicability for electronic devices from e-paper to large-format display screens.

This research was done in collaboration with Arthur Ramirez, David Lang and Xiaoliu Chi from Bell Laboratories, and Jason Lashley from Los Alamos National Laboratory, and was funded in part by the Office of Basic Energy Sciences within the U.S. Department of Energy's Office of Science.