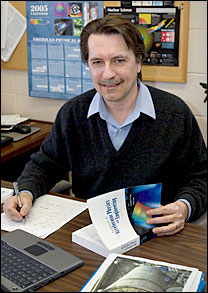 UPTON, NY - Thomas Roser, Associate Chair for Accelerators and Accelerator Division Head at the U.S. Department of Energy's Brookhaven National Laboratory, has been selected as one of two recipients of the 2005 Particle Accelerator Science and Technology Award from the Nuclear and Plasma Science Society of the Institute of Electrical and Electronics Engineers, Inc. The award, which consists of a plaque and $2,000 for each recipient, will be given to Roser and to Ronald Davidson of Princeton University, on May 18, at the biennial particle accelerator conference to be held in Knoxville, Tennessee.

In experiments at RHIC, polarized protons — elementary particles that have a spinning motion, analogous to a spinning top — collide with each other moving at nearly the speed of light. Physicists probe the resulting jets of particles in an attempt to understand how the spin of protons is related to the spin of their component parts, quarks and gluons.

Normally, the spin direction of protons is random, but the spin has to be polarized, or spinning in the same direction, to study the particles. Roser made significant contributions to the design and construction of a string of magnets called Siberian snakes for RHIC and the Alternating Gradient Synchrotron (AGS), the accelerator that feeds polarized protons into RHIC. Originally invented in Novosibirsk, Russia, in the 1970s, the magnets act to keep protons polarized.

"The partial snakes that I developed for the AGS worked to stabilize polarization during acceleration to over 50 percent. A new, stronger partial snake should give over 70 percent polarization," Roser said. "I am honored that the Nuclear and Plasma Science Society has recognized my work in this area. Actually, the design and construction of hardware and beam needed for proton polarization in RHIC and the AGS includes the contributions of many colleagues at Brookhaven."

Thomas Roser received a Ph.D. in physics from the Swiss Federal Institute of Technology in Zurich, Switzerland, in 1984. He joined the University of Michigan in 1984 as a research fellow and was appointed assistant professor of physics at the university in 1990. In 1991, he joined Brookhaven Lab as an associate physicist, and, in 1999, he was promoted to senior physicist and Accelerator Division Head of the Collier-Accelerator Department. In addition to holding that position, in 2002, he also was appointed Associate Chair for Accelerators. A Fellow of the American Physical Society, Roser received the Brookhaven Science and Technology Award in 2000.

NOTE TO LOCAL EDITORS: Thomas Roser is a resident of Massapequa, NY.