Dedication Ceremony for RIKEN-BNL Research Center's Supercomputer To be Held at Brookhaven Lab, May 26

EVENT: Dedication ceremony for the RIKEN-BNL Research Center's new supercomputer for use in physics research. 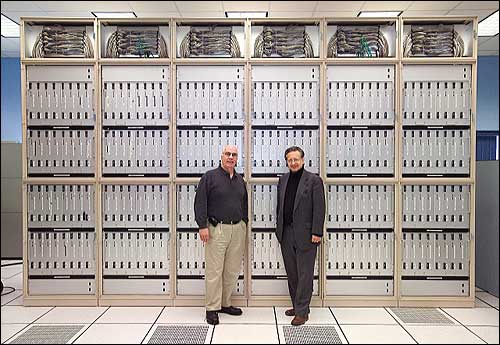 DETAILS: A new computer - the RIKEN BNL Research Center supercomputer - will be unveiled at a dedication ceremony attended by physicists from around the world. It is called QCDOC for quantum chromodynamics on a chip, and it was designed and built by groups from Brookhaven National Laboratory, Columbia University, IBM, RIKEN - The Institute of Physical and Chemical Research in Japan, and the University of Edinburgh. The computer has 10 teraflops of peak computing power, which makes it capable of performing 10 trillion arithmetic operations per second, with sustained speeds of five teraflops. Ninety percent of the time, the computer will be used for physics research — in particular, to perform the numerical calculations of quantum chromodynamics, the physics theory that describes the interactions of quarks and gluons, the basic building blocks of matter. In addition, QCDOC will perform calculations related to research on the properties of a state of matter under intense study at Brookhaven's premiere accelerator, the Relativistic Heavy Ion Collider. Researchers pursing other scientific projects in various fields will use the computer the remaining 10 percent of its operating time.