NOTE: This is an informational posting only, not a Brookhaven press release. 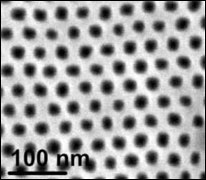 A view of the nanopatterned silicon surface, showing the array of nanocavities.

Upton, NY - In research that may help advance many emerging nanotechnologies, scientists at the U.S. Department of Energy's Brookhaven National Laboratory, together with research groups from Harvard University and IBM, have learned how a very thin layer of liquid behaves on a "nanopatterned" silicon surface - that is, a surface etched with an ordered array of cavities, each only 20 nanometers (billionths of a meter) deep. The results are published in the November 18, 2005, online edition of Physical Review Letters.

"Watching how a liquid adsorbs on a nanopatterned surface is one way to study the basic properties of liquids that are confined - in extremely tiny amounts - within nanoscale structures. In turn, understanding these properties will help scientists develop many useful fluid-based nanotechnologies," said Brookhaven physicist Oleg Gang, the paper's lead author.

For example, he said, his work could help improve developing biomedical nanodevices, such as the "lab on a chip" concept, in which dime-sized microprocessor chips can mimic the functions of a true medical lab by performing tests on tiny amounts of body fluid.

Currently, what scientists know about the microscopic behavior of liquids on solid surfaces, known as "wetting" phenomena, is predominately based on measurements taken using structureless, flat surfaces. In those cases, the behavior of the liquid is based on the strength of attractive molecule-molecule forces known as "van der Waals interactions." But for a surface that contains a regular pattern of cavities, scientists predict that the shape of the surface influences how the liquid will fill those cavities. However, those predictions have been calculated and verified for relatively deep, millionth-of-a-meter sized cavities. This study addresses how liquids fill much shallower nanoscale sized cavities and how nanopatterning a surface affects wetting.

To do this, the Brookhaven team formed thin films of a simple hydrocarbon liquid on a silicon surface patterned with billions of parabolically-shaped nanocavities. At the same time, by shining an x-ray beam at the sample at Brookhaven Lab's National Synchrotron Light Source facility (beamline X22), they "watched" the liquid fill the 20-nanometer-deep cavities.

"X-rays are an appropriate tool in this case because they allow us to investigate the nanoscale structure of the condensed liquid by averaging over billions of nanocavities, a task which is very difficult to perform with other methods," emphasized co-author Benjamin Ocko, the Brookhaven physicist who heads the research team.

The group's analysis of the x-ray data reveals that a liquid layer builds up inside each nanocavity at a much faster rate than on a flat surface of the same material. However, after the cavities are completely filled the liquid film grows similarly to one on a flat surface. Thus, early on in the liquid adsorption process, the wetting properties of the surface are considerably enhanced by the nanopattern.

"No theory has been developed for this type of nanoscale wetting, where not only the shape but the finite size of the nanocavities, i.e. their depth or width, should be taken into account," said Gang. "However, our work shows that studies involving nanocavities of other shapes, as well as refinements to current theory and theoretical simulations, are necessary to give scientists further insight into the physics of nanoscale liquids."

This research was supported by the Office of Basic Energy Sciences within the U.S. Department of Energy's Office of Science and the National Science Foundation.