This in an informational posting only, not a Brookhaven press release.

At the NSLS, Scientists Working Toward Better Batteries

As more and more people rely on cell phones, laptop computers, personal organizers, and even hybrid electric-gas vehicles, scientists are working to develop rechargeable batteries that are ever smaller, cheaper, lighter, safer, and longer-lasting. At the National Synchrotron Light Source, a collaboration of scientists is deeply involved in this effort. They are investigating a group of promising new materials for use in lithium-ion batteries, the most common type of battery found in portable electronics and the most promising type for hybrid cars. 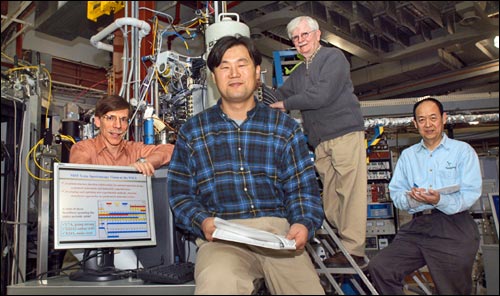 Lithium-ion batteries work by shuttling positively charged lithium ions between the "cathode" (the battery's positive terminal) and "anode" (the negative terminal). As the battery is charged, lithium ions are forced out of the cathode and moved into to the anode through the "electrolyte," the solution inside the battery. When the battery is in use, the process reverses. The scientists are studying a group of new cathode compounds consisting of the elements lithium, cobalt, nickel, manganese, and oxygen.

"Despite the wide use of lithium-ion batteries, there have been very few studies on exactly how the cathode material behaves in the charging process," said the study's lead researcher, Brookhaven chemist Won-Sub Yoon. "How are the oxygen atoms involved? What is the relationship between the oxygen atoms and the other metal atoms in the compound? To design a better cathode material, and thus a better battery, these questions must be answered. An in-depth understanding of these problems will provide a road map for the development of these new materials."

Using various x-ray techniques, Yoon and his colleagues have done just that. They discovered that as lithium ions leave the cathode material during the charging process, changes occur on the manganese and cobalt atoms that are quite different from those that occur on the nickel atoms. Specifically, the manganese and cobalt atoms do not lose electrons as the lithium ions are removed, while the nickel atoms, in contrast, do lose electrons. The group also learned more about how the cathode material compensates for the positive charge it loses as the lithium ions move to the anode. They found that empty regions with positive charge, called "holes," are created in the cathode. In addition, their x-ray data show just where these holes are located: within the electron orbitals of oxygen atoms that are bound to cobalt atoms.

Gathering these details on the cathode's electronic behavior is an important step in lithium-ion battery research. This new knowledge will help the material become a common component of a new series of better lithium-ion batteries. More detailed information on this research can be found in the group's scientific paper, which is published in the December 14, 2005, edition of the Journal of the American Chemical Society.