UPTON, NY - Hydrogen-storage materials hold the promise of supporting many exciting new technologies, such as clean, efficient hydrogen fuel cells for automobiles. At the U.S. Department of Energy's Brookhaven National Laboratory, scientists are working toward this goal by studying the basic mechanisms that underlie reversible hydrogen storage in certain materials. 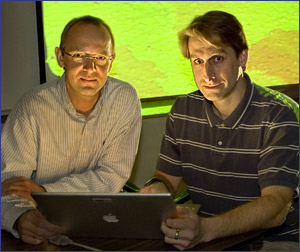 Currently, a main factor limiting the development of hydrogen-based energy technologies, such as fuel cells, is the ability to store a sufficient amount of hydrogen in a way that allows for easy and safe refueling. One of the most promising materials is titanium-doped sodium alanate, a type of material known as a "complex metal hydride." Sodium alanate, on its own, is able to store and release a reasonable amount of hydrogen, but refueling the spent material requires it to be "doped" with a small amount of titanium. The titanium atoms allow sodium alanate to work efficiently at realistic temperatures and pressures.

"Our work focuses on how titanium atoms facilitate the hydrogen uptake in sodium alanate," said Brookhaven material scientist Peter Sutter, a member of the research team. "Understanding the atomic mechanisms that govern this process will guide us in a targeted search for a viable material for large-scale hydrogen storage."

A key step in the refueling process is the splitting of incoming hydrogen molecules (hydrogen atoms tend to bind in pairs) into single hydrogen atoms. The hydrogen then combines with aluminum and sodium to form crystalline sodium alanate. Sutter and his colleagues predict that the titanium atoms bind to the aluminum atoms in such a way as to create "active sites" where hydrogen molecules are separated and ultimately incorporated. These active sites are being studied experimentally using scanning tunneling microscopy, a powerful imaging technique that is able to image individual atoms at surfaces.

Erik Muller, a postdoctoral researcher working with Sutter and a research associate in Brookhaven's hydrogen storage research team, will discuss their results at the March meeting of the American Physical Society in Baltimore, Maryland. He will give his talk at 9:48 a.m. on Wednesday, March 15, in Room 312 of the Baltimore Convention Center.

This research is funded by the Office of Basic Energy Sciences within the U.S. Department of Energy's Office of Science.