New Wrinkle in the Mystery of High-Tc Superconductors

BALTIMORE, MD - In the twenty years since the discovery of high-temperature (Tc) superconductors, scientists have been trying to understand the mechanism by which electrons pair up and move coherently to carry electrical current with no resistance. "We are still at the beginning," says Tonica Valla, a physicist at the U.S. Department of Energy's Brookhaven National Laboratory, who will give a talk on his group's latest results at the American Physical Society meeting in Baltimore, Maryland on Thursday, March 16, 2006. "If anything," he adds, "it looks like the story is getting more complicated." 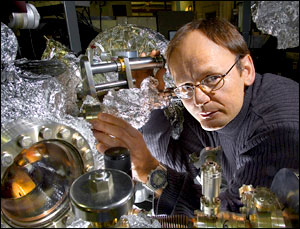 In 1999, Valla's group was the first to observe a "kink" in the energy level of electrons in high-Tc superconductors just as they went through the transition temperature from their normal to superconducting state. The kink was the first clue to explaining what the mechanism of electron pairing might be.

"The kink gave us the hope that we could identify the interaction that was responsible for the electron pairing," said Valla. Some groups hold that the mechanism is the same as in conventional superconductors - that is, that phonons, or vibrations in the crystal lattice, are responsible for electron pairing. Other scientists believe that changes in the spin alignment, or magnetic polarity, of adjacent electrons - known as magnons - are responsible. "The problem is that there are both phonons and magnons in the crystal with the energy where we see the kink, so it is still not clear," Valla says.

"The fact that this system, which is not a superconductor, has similar properties to the superconducting system is not helping to solve the mystery," Valla says. But then he notes that 20 years since the discovery of high-Tc superconductors is still not that long. "For conventional superconductors," he says, "it took about 50 years to come up with a good explanation for the behavior."

Valla's talk is part of a session on the use of angle-resolved photoemission spectroscopy in the study of high-Tc superconductors. It will include a discussion of advances in this technique. His group uses bright beams of ultraviolet light at the National Synchrotron Light Source, one of Brookhaven Lab's premiere research facilities, to emit electrons from the samples they are studying. Using high-resolution spectrometers, the scientists measure the energy and the angle at which the electrons exit the crystal, allowing them to reconstruct the electrons' state while in the crystal - their energy level and whether they had any interactions with phonons/magnons.

This research was funded by the Office of Basic Energy Sciences within the U.S. Department of Energy's Office of Science. The Department of Energy has a keen interest in understanding the mechanisms of superconducting materials - particularly those that can carry current with zero resistance at higher temperatures - because these materials have many potential applications in improving the efficiency of energy generation and transmission.