ATLANTA, GA - Chemists and materials scientists often study "nanotubes" - capsule-shaped molecules only a few billionths of a meter (nanometers) in width. In nanotube form, many materials take on useful, unique properties, such as physical strength and excellent conductivity. Carbon nanotubes are the most widely investigated variety. Now, in pioneering research, scientists at the U.S. Department of Energy's Brookhaven National Laboratory have created and investigated the properties of nanotubes made of a different, yet equally interesting material: cerium oxide. 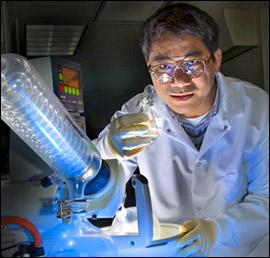 "Cerium oxide nanotubes have potential applications as catalysts in vehicle emission-control systems and even fuel cells," says Brookhaven chemist Wei-Qiang Han, the lead scientist involved in the work. "But until very recently, they haven't been studied."

Han will explain this synthesis method at the American Chemical Society National Meeting in Atlanta, Georgia. His talk will take place at 3:00 p.m. on Tuesday, March 28, 2006, in Room B403 of the Georgia World Congress Center.

During his talk, Han will also discuss his group's recent study - how cerium oxide nanotubes release oxygen ions when immersed in a low-oxygen environment, a process that is critical to the nanotubes' effectiveness as catalysts. To do this, the researchers have used several techniques. These include "transmission electron microscopy," a very powerful imaging technique, and two x-ray techniques, which they performed at Brookhaven's National Synchrotron Light Source.

"We're interested in studying oxygen-atom vacancies in cerium oxide nanotubes because, when combined with their other surface features, these vacancies may make them more functional and effective in the applications mentioned," Han said.

This work was funded by the Office of Basic Energy Sciences within the U.S. Department of Energy's Office of Science.