The following news release is issued by the U.S. Department of Energy's Fermi National Accelerator Laboratory and is being distributed by Brookhaven National Laboratory.

For the MINOS experimental results reported below, Brookhaven National Laboratory's Mary Bishai, Mark Dierckxsens, and Brett Viren meticulously recorded important parameters such as intensity for every pulse of the neutrino beam for the entire one-year running period. "For every event recorded in the two detectors, we know the intensity of the proton pulse from the Fermilab main injector accelerator," said Milind Diwan, who first joined the MINOS experiment five years ago with the late Michael Murtagh. The data are critical in scaling results from the near and far detectors. The entire Brookhaven team, which also includes David E. Jaffe, is now getting ready to analyze the data for more precision. Added Diwan, "The next stage of research will be to see if some of the 'disappeared' neutrinos have appeared as electron neutrinos."

Dierckxsens will be giving a talk on the MINOS results on Thursday, April 6, at 11 a.m., in the Small Seminar Room in Bldg. 510.

BATAVIA, Illinois-An international collaboration of scientists at the Department of Energy's Fermi National Accelerator Laboratory announced today (March 30, 2006) the first results of a new neutrino experiment. Sending a high-intensity beam of muon neutrinos from the lab's site in Batavia, Illinois, to a particle detector in Soudan, Minnesota, scientists observed the disappearance of a significant fraction of these neutrinos. The observation is consistent with an effect known as neutrino oscillation, in which neutrinos change from one kind to another. The Main Injector Neutrino Oscillation Search (MINOS) experiment found a value of delta m^2 = 0.0031 eV^2, a quantity that plays a crucial role in neutrino oscillations and hence the role of neutrinos in the evolution of the universe.

"Only a year ago we launched the MINOS experiment," said Fermilab Director Pier Oddone. "It is great to see that the experiment is already producing important results, shedding new light on the mysteries of the neutrino." 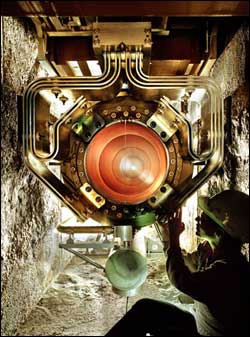 When operating at highest intensity, the NuMI beam line will transport a package of 20,000 billion protons every two seconds to a graphite target. The target converts the protons into bursts of particles with exotic names such as kaons and pions. Like a beam of light emerging from a flashlight, the particles form a wide cone when leaving the target. A set of two special lenses, called horns (photo), is the key instrument to focus the beam and send it in the right direction. The beam particles decay and produce muon neutrinos, which travel in the same direction. (Click on image to download a high-resolution version.)

Nature provides for three types of neutrinos, yet scientists know very little about these "ghost particles," which can traverse the entire Earth without interacting with matter. But the abundance of neutrinos in the universe, produced by stars and nuclear processes, may explain how galaxies formed and why antimatter has disappeared. Ultimately, these elusive particles may explain the origin of the neutrons, protons and electrons that make up all the matter in the world around us.

"Using a man-made beam of neutrinos, MINOS is a great tool to study the properties of neutrinos in a laboratory-controlled environment," said Stanford University professor Stan Wojcicki, spokesperson of the experiment. "Our first result corroborates earlier observations of muon neutrino disappearance, made by the Japanese Super-Kamiokande and K2K experiments. Over the next few years, we will collect about fifteen times more data, yielding more results with higher precision, paving the way to better understanding this phenomenon. Our current results already rival the Super-Kamiokande and K2K results in precision."

Neutrinos are hard to detect, and most of the neutrinos traveling the 450 miles from Fermilab to Soudan-straight through the Earth, no tunnel needed-leave no signal in the MINOS detector. If neutrinos had no mass, the particles would not change as they traverse the Earth and the MINOS detector in Soudan would have recorded 177 +/- 11 muon neutrinos. Instead, the MINOS collaboration found only 92 muon neutrino events-a clear observation of muon neutrino disappearance and hence neutrino mass. The deficit as a function of energy is consistent with the hypothesis of neutrino oscillations, and yields a value of delta m^2, the square of the mass difference between two different types of neutrinos, equal to 0.0031 eV^2 +/- 0.0006 eV^2, (statistical uncertainty) +/- 0.0001 eV^2 (systematic uncertainty). In this scenario, muon neutrinos can transform into electron neutrinos or tau neutrinos, but alternative models-such as neutrino decay and extra dimensions-are not yet excluded. It will take the recording of much more data by the MINOS collaboration to test more precisely the exact nature of the disappearance process.

Details of the current MINOS results will be presented by David Petyt of the University of Minnesota at a special seminar at Fermilab on March 30, 2006, at 4:00 p.m. A day later, the MINOS collaboration will commemorate MINOS co-spokesperson Doug Michael at a memorial service at Fermilab. Michael, senior research associate at Caltech, died at age 45 on December 25, 2005, after a year-long battle with cancer.

The MINOS experiment includes about 150 scientists, engineers, technical specialists and students from 32 institutions in 6 countries, including Brazil, France, Greece, Russia, the United Kingdom and the United States. The institutions include universities as well as national laboratories. The U.S. Department of Energy provides the major share of the funding, with additional funding from the U.S. National Science Foundation and from the United Kingdom's Particle Physics and Astronomy Research Council.

"The MINOS experiment is a hugely important step in our quest to understand neutrinos-we have created neutrinos in the controlled environment of an accelerator and watched how they behave over very long distances," said Professor Keith Mason, CEO of PPARC. "This has told us that they are not totally massless as was once thought, and opens the way for a detailed study of their properties. UK scientists have taken key roles in developing the experiment and in exploiting the data from it, the results of which will shape the future of this branch of physics."

The Fermilab side of the MINOS experiment consists of a beam line in a 4,000-foot-long tunnel pointing from Fermilab to Soudan. The tunnel holds the carbon target and beam focusing elements that generate the neutrinos from protons accelerated by Fermilab's Main Injector accelerator. A neutrino detector, the MINOS "near detector" located 350 feet below the surface of the Fermilab site, measures the composition and intensity of the neutrino beam as it leaves the lab. The Soudan side of the experiment features a huge 6,000-ton particle detector that measures the properties of the neutrinos after their 450-mile trip to northern Minnesota. The cavern housing the detector is located half a mile underground in a former iron mine.

"It is a great gift for me to hear this news," said Yoji Totsuka, former spokesperson of the Super-Kamiokande experiment and now Director General of KEK. "Neutrino oscillation was first established in 1998, with cosmic-ray data taken by Super-Kamiokande. The phenomenon was then corroborated by the K2K experiment with a neutrino beam from KEK. Now MINOS gives firm results in a totally independent experiment. I really congratulate their great effort to obtain the first result in such a short time scale."

Fermi National Accelerator Laboratory, founded in 1967, is a Department of Energy National Laboratory in Batavia, Illinois, about 40 miles west of Chicago. Fermilab operates the world's highest-energy particle accelerator, the Tevatron, on its 6,800-acre campus. About 2,300 physicists from universities and laboratories around the world conduct physics experiments using Fermilab's accelerators to discover what the universe is made of and how it works. Discoveries at Fermilab have resulted in remarkable new insights into the nature of the world around us. Fermilab is operated by Universities Research Association, Inc., a consortium of 90 research universities, for the United States Department of Energy, which owns the laboratory. 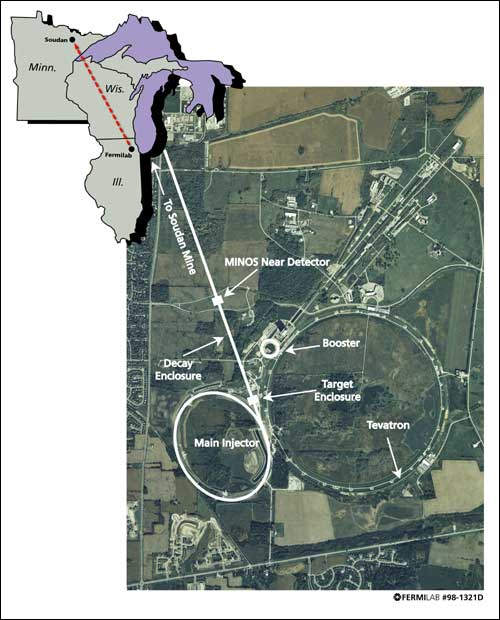 Neutrinos, ghost-like particles that rarely interact with matter, travel 450 miles straight through the earth from Fermilab to Soudan — no tunnel needed. The Main Injector Neutrino Oscillation Search (MINOS) experiment will study the neutrino beam using two detectors. The MINOS near detector, located at Fermilab, records the composition of the neutrino beam as it leaves the Fermilab site. The MINOS far detector, located in Minnesota, half a mile underground, will again analyze the neutrino beam. It will allow scientists to directly study the oscillation of muon neutrinos into electron neutrinos or tau neutrinos under laboratory conditions. (Click on image to download a high-resolution version.)