UPTON, NY - Researchers at the U.S. Department of Energy's Brookhaven National Laboratory and colleagues at Stony Brook University, the IRCCS NEUROMED Medical Center in Italy, and Georgetown University say improvements they have made to an experimental form of radiation therapy that has been under investigation for many years could make the technique more effective and eventually allow its use in hospitals. Results on the improved method, which was tested in rats, will be published online this week by the Proceedings of the National Academy of Sciences.

But the technique has limitations. For one thing, only certain synchrotrons can generate its very thin beams at adequate intensity, and such facilities are available at only a few research centers around the world. 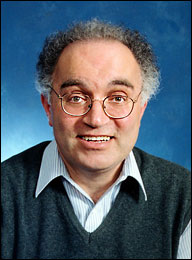 "The new development seeks a way out of this situation," explained Brookhaven scientist Avraham Dilmanian, lead author of the new study. In this paper, the scientists report results that demonstrate the potential efficacy of significantly thicker microbeams, as well as a way to "interlace" the beams within a well-defined "target" inside the subject to increase their killing potential there, while retaining the technique's hallmark feature of sparing healthy tissue outside that target.

First, they exposed the spinal cords and brains of healthy rats to thicker (0.27 to 0.68 millimeter) microbeams at high doses of radiation and monitored the animals for signs of tissue damage. After seven months, animals exposed to beams as thick as 0.68 millimeter showed no or little damage to the nervous system.

"This demonstrates that the healthy-tissue-sparing nature of the technique stays strong at a beam thickness that is within a range that could be produced by specialized x-ray tubes of extremely high voltage and current," Dilmanian said. Such x-ray sources may become available sometime in the future and may allow the implementation of the method in hospitals.

Next, the scientists demonstrated the ability to "interlace" two parallel arrays of the thicker microbeams at a 90-degree angle to form a solid beam at a small target volume in the rats' brains, and measured the effects of varying doses of radiation on the targeted tissue volume and the surrounding tissue using magnetic resonance imaging (MRI) scans. For interlacing, the gaps between the beams in each array were chosen to be the same as the thickness of each beam, so the beams from one array would fill the gaps in the other to produce the equivalent of an unsegmented beam in the target volume only.

"In this way we are effectively delivering an unsegmented broad beam type of dose to just the target region - which could be a tumor, or a non-tumerous target we want to ablate - while exposing the surrounding tissue to segmented radiation from which it can recover," Dilmanian said.

Said collaborator Eliot Rosen, a radiation oncologist at Lombardi Comprehensive Cancer Center, Georgetown University, "This form of microbeam radiation therapy could improve the treatment of many forms of cancer now treated with radiation, because it can deliver a more lethal dose to the tumor while minimizing damage to surrounding healthy tissue. It may also extend the use of radiation to cases where it is now used only judiciously, such as brain cancer in patients under three years of age, because of the high sensitivity of young brain tissue to radiation."

And according to collaborators David Anschel, a neurologist at Stony Brook University and Brookhaven Lab, and Pantaleo Romanelli, a neurosurgeon from NEUROMED Medical Center, the technique may also have applications in treating a wide range of benign and malignant brain tumors and other functional brain disorders such as epilepsy and Parkinson's disease.

MRT research was initiated by retired Brookhaven scientist Daniel Slatkin, the late Per Spanne, also from Brookhaven, Dilmanian, and others in the early 1990s at Brookhaven's NSLS. Since the mid 1990s, the method has been under ongoing investigation also at ESRF.

It is not clear why high dose MRT is effective at killing tumor tissue while sparing healthy tissue. The researchers hypothesize that the normal tissue repairs itself, in part, as a result of the survival between the microbeams of the microvasculature's angiogenic cells. This effect seems to occur more successfully in the normal tissue than in tumors, although other factors also seem to be involved.

Neither the original nor the improved MRT technique has been tested in humans.

The MRT research program at Brookhaven was funded in the past by Brookhaven's Laboratory Directed Research and Development program, the Children's Brian Tumor Foundation, the Office of Biological and Environmental Research within the U.S. Department of Energy's Office of Science, and by the National Institutes of Health. The studies were carried out at the NSLS, which is supported by the Office of Basic Energy Sciences within DOE's Office of Science.