How chemistry has enhanced scientists' ability to see inside the brain 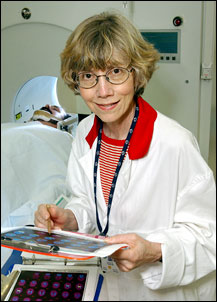 SAN FRANCISCO, CA - Molecular imaging using positron emission tomography (PET) continues to provide new knowledge about how brain circuits are altered by addictive drugs. Chemist Joanna Fowler, Director of the Center for Translational Neuroimaging at the U.S. Department of Energy's Brookhaven National Laboratory and a pioneer in the development of radioactively "tagged" molecules used with PET, will give a talk on these radiotracers at the 232nd national meeting of the American Chemical Society in San Francisco, California, at 8:25 a.m. Pacific Time on Thursday, September 14, 2006, in Room 270 of the Moscone Convention Center.

"Addiction is a brain disease that is devastating for families and society," said Fowler. "Chemistry - through the development of radiotracers that can monitor the distribution and kinetics of drugs and receptors in the brain - is at the core of understanding the addictive process and finding new ways to help people overcome it."

In PET studies, radiotracers (compounds labeled with a radioactive form of certain chemical elements such as carbon or fluorine) are injected into a research subject's bloodstream. A PET scanner picks up the radioactive signal from the tracer and continuously tracks its concentration and movement through the body. The data can be used to reconstruct three-dimensional images that reveal where the compound goes in the body/brain and how long it stays, for example.

The Brookhaven group, led by Fowler, has developed radiotracers to track the movement of various addictive drugs including cocaine, nicotine, and methamphetamine, and also to measure the levels of certain "chemical messengers," or neurotransmitters, and their receptors in the brain. PET studies using these radiotracers have revealed, for example, that all addictive drugs elevate levels of a neurotransmitter called dopamine, a chemical that helps us experience feelings of pleasure, reward, and motivation - and also plays a role in physical movement. Through the process of addiction, these studies show, the brain's ability to respond to pleasure signals becomes depleted as receptors for dopamine are lost. The research has also indicated that initial differences in people's dopamine systems may help explain why some people find drugs pleasurable and become addicted while others do not.

One of the challenges for the researchers has been developing extremely rapid methods for synthesizing the radiotracer compounds. The radioactive elements (isotopes) most commonly used, carbon-11 (11C) and fluorine-18 (18F), have very short half-lives (20 and 110 minutes, respectively). The half-life is the time it takes for half of the radioactive atoms in the sample to decay to a non-radioactive form. Since the PET scanner depends on the radioactive signal to detect the substance in the body, the compounds must be made and injected quickly to generate useful data.

"We are currently developing new ways to label complex molecules with carbon-11 and fluorine-18 to gain a better understanding of how different drugs of abuse disrupt brain function and how we may be able to treat addiction," said Fowler. "This is an area that benefits enormously from creative synthetic chemistry. It is also an area that desperately needs new talent to develop the scientific tools needed to solve this major public health problem."

Fowler is no stranger to radiotracer chemistry. In 1976, she and her colleagues synthesized 18F-fluorodeoxyglucose (FDG), the first radiotracer to measure brain glucose metabolism. As a stand-in for glucose, the body's main chemical fuel, FDG can help scientists monitor metabolic activity throughout the body and brain. Today, FDG is widely used in PET centers around the world to study and diagnose neurological and psychiatric diseases and to diagnose lung and colon cancer.

Fowler also developed another radiotracer that first showed that cocaine's distribution in the human brain parallels its effects on behavior, and a series of radiotracers to map monoamine oxidase (MAO), a brain enzyme that regulates the levels of other neurotransmitters. Using these radiotracers, she discovered that smokers have reduced levels of MAO in their brains, a finding that may account for some of the behavioral and epidemiological features of smoking, such as the high rate of smoking in individuals with depression and drug addiction.

Fowler earned her Ph.D. in chemistry from the University of Colorado and did her postdoctoral work at the University of East Anglia in England and at Brookhaven. She joined the staff of Brookhaven in 1971. A member of the National Academy of Sciences, Fowler has won numerous other honors including the American Chemical Society's 2002 Glen T. Seaborg Award for Nuclear and Radiochemistry, the 2000 Society of Nuclear Imaging in Drug Development's Alfred P. Wolf Award; the U.S. Department of Energy's 1999 E. O. Lawrence Award, and the 1998 Francis P. Garvan-John M. Olin Medal. She has been published in more than 300 peer-reviewed articles in leading scientific journals and holds eight patents for radiolabeling procedures.

This research is supported by the Office of Biological and Environmental Research with the U.S. Department of Energy's Office of Science and by the National Institutes of Health. Imaging techniques such as PET are a direct outgrowth of DOE's long-standing investment in basic physics and chemistry research. Through work on accelerators designed to answer questions about the fundamental nature of matter and energy, pioneering DOE scientists understood and realized the potential to develop such tools for the diagnosis and treatment of disease. The ongoing research using these tools to investigate drug addiction and other diseases is a prime example of how our national laboratories bring together the expertise of chemists, physicists, and medical professionals to address questions of profound significance for society.