UPTON, NY - About 350 middle school students, primarily from Long Island, learned about nanotechnology at the FIRST LEGO League Tournament held at Longwood High School on January 21. The tournament is an international program created in a partnership between a not-for-profit organization called FIRST (For Inspiration and Recognition of Science and Society) and the LEGO Group, the world's sixth largest toy manufacturer, based on their belief that fun and learning go hand-in-hand.

The tournament at Longwood engaged students in scientific research and hands-on robotics design, with an emphasis on nanotechnology and how it can solve real-world problems. Battelle and Brookhaven Lab were the primary sponsors of the tournament, and School-Business Partnerships of Long Island, Inc., coordinated the event. 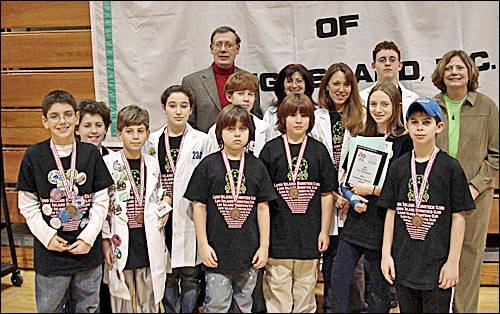 Nanotechnology is a new frontier in science that promises to impact many facets of society, from computers to medicine. Later this year, Brookhaven Lab will open the Center for Functional Nanomaterials, which will provide scientists with state-of-the-art facilities to study materials at nanoscale dimensions - typically, a few billionths of a meter, or about 10,000 times smaller than a human hair.

Some of the 35 teams in the tournament built robots to perform specified tasks using robotic toolsets manufactured by LEGO. Other teams created written and oral research projects based on their studies of nanotechnology. Most teams participated in both the hands-on contest and the research component.

The Long Island Robotics Club of Plainview won the Technology Transfer Award sponsored by Brookhaven Lab. The Plainview group presented a research project in which they developed a storybook, a nano-board game, and a fact book titled "How Can Nano Technology Help the Earth and Things That Live On It?"

Gail Donoghue, one of the Brookhaven Lab judges, said, "The team that won the Brookhaven award presented their research in a very understandable and fun format, and their project will be displayed in Brookhaven's Science Learning Center." More than 28,000 visitors, mainly students from local elementary and middle schools, engage in science-related activities at the center each year.

A team from Windham, New Hampshire, won both the first-place Robot Performance Award and the most prestigious Champion's Award, and they will have the opportunity to participate in the FIRST LEGO League World Festival, to be held April 12-14, 2007, in Atlanta, Georgia.

First-place winners also included: a team from Port Washington, who won the Research Project Award; Bayport-Blue Point, who won the Robot Design Award; another Plainview team, who won the Teamwork Award, and Longwood Middle School students, who won both the Rising Star and Judges' Awards.