CHICAGO, IL - Scientists at the U.S. Department of Energy's (DOE) Brookhaven National Laboratory are trying to design catalysts inspired by photosynthesis, the natural process by which green plants convert sunlight, water, and carbon dioxide into oxygen and carbohydrates. The goal is to design a bio-inspired system that can produce fuels like methanol, methane, and hydrogen directly from water and carbon dioxide using renewable solar energy. Four Brookhaven chemists will discuss their research on this so-called "artificial photosynthesis" at the 233rd National Meeting of the American Chemical Society.

Mother Nature's work isn't so easy to perform in a laboratory. In the beginning stages of photosynthesis, the absorption of light by chlorophyll - a molecule responsible for the green color in plants - drives the complex photosynthetic reaction. The energy of sunlight is transferred in the form of electrons and positive charges throughout a pathway of various steps before the final products - carbohydrates (the plants' food) and oxygen - are produced. However, because the components of natural photosystems do not work properly outside their normal environment, the Brookhaven scientists are investigating other cataylsts that could be used to replicate these natural functions. Below are summaries of these talks, which are part of the American Chemical Society symposium "Catalysis Relevant to Energy and Sustainability."

NOTE: The embargo date/time for each talk is specified after the title.

To replicate one of the important steps in natural photosynthesis, Brookhaven chemists James Muckerman and Dmitry Polyansky have turned to molecular complexes containing metals such as ruthenium that can drive the conversion of water into oxygen, protons, and electrons. These ruthenium catalysts hold water molecules in place to make oxygen bonds while the protons and electrons are transferred among the molecules and the catalyst, providing the charges necessary to continue the photosynthesis process. During this multi-step reaction, Polyansky tries to experimentally determine the stability and geometry of the molecules with different kinds of time-resolved optical spectroscopy techniques. Muckerman compares the lab results to calculations based on theory. Because the intermediate species can be very unstable, they might exist for much less than a millisecond, or one thousandth of a second. This makes catching the molecules in action very difficult. "The catalysts we're using are not necessarily the ultimate catalysts to be used in any practical photosynthetic device," Muckerman said. "The aim of our work is to understand how theses catalysts work and to elucidate the detailed mechanistic steps so we can design better catalysts." Muckerman will discuss his work at 10:50 a.m. Central Time/ 11:50 p.m. Eastern Time in room E270, Level 2, of the McCormick Place East, Chicago, Illinois. Polyansky will follow at 11:20 a.m. Central Time/ 12:20 p.m. Eastern Time. 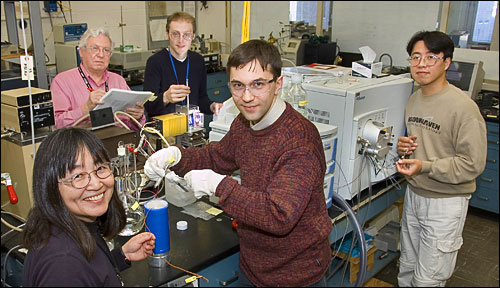 Further down the photosynthetic line, there's another molecule whose function scientists are trying to replicate. Like a robotic arm on an assembly line, a special molecule called the NADP+/NADPH coenzyme cycles back and forth, picking up a proton and two electrons and depositing them (or their combined negative ion, called a hydride) for use in the eventual production of carbohydrates. This coenzyme molecule is recyclable in natural photosynthesis, but cannot perform its catalytic function in the laboratory. The goal for scientists is to find an NADPH-inspired catalyst that will mimic nature's cyclical motion. "Using visible light, we want to regenerate hydride donors, where the same molecule will just keep turning over," said Brookhaven chemist Etsuko Fujita. Like Muckerman and Polyansky, Fujita and her coworkers are also using a ruthenium-based complex for their functional model. This artificial complex has been shown to work similarly to NADP+/NADPH, acting as the source of two electrons and a proton in the transformation of acetone to isopropanol. The researchers are investigating how the hydride donors can be generated using light, and plan to use this type of artificial catalyst for the production of fuels from carbon dioxide (or related molecules) in the future. Fujita will discuss her research at 3:45 p.m. Central Time/ 4:45 p.m. Eastern Time in room E270, Level 2, of the McCormick Place Lakeside, Chicago, Illinois.

One of the final steps in "artificial photosynthesis" is turning carbon dioxide molecules (CO2) into clean, useful fuels. Catalysts capable of converting CO2 into carbon monoxide (CO) - a powerful source of fuel - already exist. However, "the problem is that the catalysts are inefficient and slow - nowhere near efficient enough to use in a practical application," said Brookhaven chemist David Grills. One of the reasons for this is that the liquid solvent used to dissolve the chemicals deactivates one of the key intermediate species that reacts with CO2. So Grills is trying to eliminate the need for this solvent by pressurizing and heating up the CO2 (which is a gas under normal conditions) until it takes on some of the properties of a liquid and can act as a good solvent. "Now, our solvent is the reactant and nothing else is getting in the way," Grills said. In addition to speeding up the reaction time, the physical properties of this so-called supercritical CO2 can be easily tuned to change the reaction, and the use of toxic organic solvents is avoided. Grills will discuss his research at 11:45 a.m. Central Time/ 12:45 p.m. Eastern Time in room E270, Level 2, of the McCormick Place East, Chicago, Illinois.

The Brookhaven research is funded through the DOE's Chemical Science Program (Photochemistry and Radiation Research) and Hydrogen Program, which implements the President's Hydrogen Fuel Initiative, a five-year program that began in 2003 to sponsor research, development, and demonstration of hydrogen and fuel cell technologies. Specifically, the funding derived from DOE's Office of Basic Energy Sciences. Collaborators include scientists at the University of Houston, the Institute for Molecular Science in Japan, and the University of Nottingham in the United Kingdom.