UPTON, NY — Scientists at the U.S. Department of Energy's Brookhaven National Laboratory and collaborators at Stony Brook University have received U.S. Patent Number 7,179,448 for developing chimeric, or "combination," proteins that may advance the development of vaccines and diagnostic tests for Lyme disease. 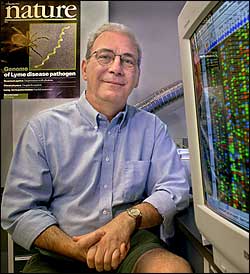 The genetically engineered proteins combine pieces of two proteins that are normally present on the surface of the bacterium that causes Lyme disease, but at different parts of the organism's life cycle. "Combining pieces of these two proteins into one chimeric protein should trigger a 'one-two-punch' immune response more capable of fending off the bacterium than either protein alone," says Brookhaven biologist John Dunn, a researcher on the BNL Lyme disease team. "These chimeric proteins could also be used as diagnostic reagents that distinguish disease-causing strains of bacteria from relatively harmless ones, and help assess the severity of an infection," Dunn said.

Lyme disease is the most common vector-borne disease in the U.S., causing approximately 25,000 new cases each year - a rate that is expected to increase by at least a third from 2002 to 2012, according to a new study. Early symptoms of the disease, which is spread by the bite of an infected deer tick, include a bull's-eye rash at the site of the bite and flu-like symptoms. If not promptly treated with antibiotics, it can lead to more serious symptoms, including joint and neurological complications.

Scientists have been working on vaccines based on the structures of proteins found on the outer surface of Borrelia burgdoferi, the bacterium that causes Lyme disease. Dunn and colleagues deciphered the atomic level structures of these proteins, known as outer surface proteins A and C (OspA and OspC), at the National Synchrotron Light Source (NSLS) at Brookhaven Lab. The OspA protein, which was used to make the original vaccine against Lyme disease, is only present in the bacteria while they are in the cold-blooded deer tick's stomach, and not in the host. After the tick bites a warm-blooded mammalian host, the injected bacteria produce OspC on their surface.

The researchers have demonstrated that the new combination proteins retain the ability to trigger an immune response to at least one or both of the antigens, and can trigger the production of antibodies that inhibit growth of and/or kill Borrelia bacteria in laboratory cultures. They've also shown that the chimeric proteins can be mass-produced in E. coli bacteria, a common laboratory technique for making proteins, and easily purified for possible use in vaccines or diagnostic assays.

"This could lead to a vaccine that is effective at different stages of the organism's life cycle," said Dunn. Moreover, by incorporating unique protein fragments from various pathogenic families of Borrelia, these chimeric proteins could be used to distinguish clinically important exposure to disease-causing Borrelia from exposures to other non-pathogenic families of Borrelia.

This research was funded by the Office of Biological and Environmental Research within the U.S. Department of Energy's Office of Science and by the National Institutes of Health.