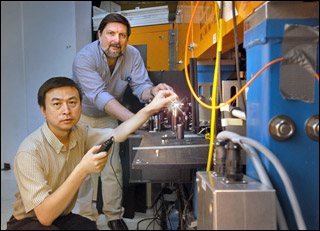 UPTON, NY - Researchers at the U.S. Department of Energy's Brookhaven National Laboratory have generated extremely short pulses of light that are the strongest of their type ever produced and could prove invaluable in probing the ultra-fast motion of atoms and electrons. The scientists also made the first observations of a phenomenon called cross-phase modulation with this high-intensity light - a characteristic that could be used in numerous new light source technologies.

The work, which was done at Brookhaven's Source Development Laboratory, an offshoot of the Lab's National Synchrotron Light Source (NSLS), is described online in the July 23, 2007, edition of Physical Review Letters.

The light pulses used were in the terahertz (THz) range of the broad electromagnetic spectrum, found between the microwave and infrared range. Scientists send tight bunches of electrons at nearly the speed of light through a magnetic field to produce THz radiation at a trillion cycles per second - the terahertz frequency that gives the light its name and that makes them especially valuable for investigating biological molecules and imaging, ranging from tumor detection to homeland security.

The Brookhaven team is looking to expand the potential uses for this type of light by increasing the strength of individual THz pulses, a longtime goal for scientists in the field. By slamming an electron beam from an accelerator into an aluminum mirror, the researchers produced 100 microjoule (100 megawatt) single-cycle pulses - the highest energy ever achieved to date with THz radiation. For comparison, 100 megawatts is about the output of a utility company's electrical generator. 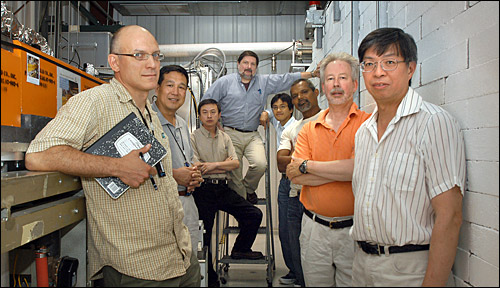 "The goal is really to understand the properties of materials," said NSLS researcher Yuzhen Shen, the lead author of the paper. "One might ask what happens in a solid when light, electricity, or sound goes through it, and it's all related to atoms in a crystal wiggling around or the movement of electrons. So the effort surrounding ultra-fast pulses is going into making tools to probe the real fundamental properties of materials on the scales at which they move."

Using this strong light, researchers can "kick" molecular processes such as catalysis or electronic switching (important for developing data storage media) into action and watch their mechanisms on a very short timescale.

The team also found something surprising: the intensity of their THz pulses is so great that they introduce so-called "nonlinear optical effects," specifically, a phenomenon known as cross-phase modulation.

"When you pull on a spring, if you pull twice as hard, it stretches twice as much," said NSLS researcher Larry Carr. "But there's a limit where if you pull twice as hard, the spring doesn't move anymore. That's when it's called nonlinear. The same thing happens in materials. You let these short pulses pass through a material, and they stress it and pull some of the charges apart so they don't act in a linear manner."

As a result, the researchers can manipulate both the ultra-fast THz pulses and the material they interact with. Some of the simplest examples include changing the color of the light or turning the material into a focusing lens.

This is the first time cross-phase modulation has been observed in single-cycle THz pulses. Learning how to control this characteristic could lead to even more light source technologies.

This research was supported by the Office of Basic Energy Sciences within the U.S. Department of Energy's Office of Science, the Office of Naval Research, and Brookhaven's Laboratory Directed R&D funds.