UPTON, NY - José Rodriguez, a senior chemist at the U.S. Department of Energy's (DOE) Brookhaven National Laboratory, will receive an Outstanding Technical Achievement Award from HENAAC, a nonprofit organization that honors the outstanding contributions of Hispanic American professionals in science, engineering, technology and mathematics. Rodriguez will be honored at the HENAAC Awards Show in San Diego on October 12. 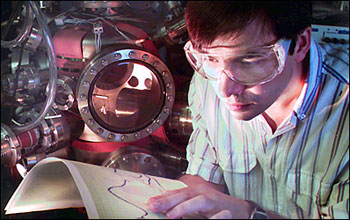 "I am honored to receive this award," said Rodriguez. "My research on catalysts is entering a new phase with state-of-the-art tools available to me at Brookhaven Lab's Center for Functional Nanomaterials (CFN). My collaborators from Hispanic and American universities and I are studying catalysts that may optimize the production of hydrogen, which is expected to be the fuel of the future."

During his 16-year career at Brookhaven Lab, Rodriguez's primary research focus has been on catalysts used for the production of clean, efficient, renewable fuels and for the control of environmental pollution. Rodriguez and his research team have made significant advances in these areas. For example, they recently studied gold deposited on ceria (cerium-oxide) nanoparticles at Brookhaven's National Synchrotron Light Source (NSLS) and found the catalyst's active phase responsible for the conversion of water and carbon monoxide to hydrogen gas and carbon dioxide. Understanding this "water-gas shift" reaction is important for generating hydrogen, which can be used for chemical transformations as well as a fuel in a hydrogen-based economy.

In new research funded by the Office of Basic Energy Sciences within the DOE Office of Science, Rodriguez and researchers from Brookhaven's NSLS and CFN will combine their efforts with those of scientists from the University of Barcelona, University of Seville, and Central University of Venezuela to better understand and improve the performance of nanocatalysts. They are studying a critical step in processing of pure hydrogen for fuel cells and other industrial applications with the goal of gaining information on how several promising nanocatalysts function. His team's approach is unique because they will apply a suite of powerful research tools that work in the actual reaction environment. These experiments may lead to the development of new, improved catalysts.

Born and raised in Venezuela, Rodriguez maintains close ties with the Hispanic community. He has been a mentor to more than 20 graduate students and research associates at Brookhaven, many of them being of Latino heritage. Since 1999, he has given talks each year at universities in Hispanic countries, including Argentina, Mexico, Spain and Venezuela. He also is an adjunct principal investigator at the Venezuelan Institute of Scientific Research, and he has been an organizer and session moderator for the San Luis Symposia, a workshop designed to foster new collaborations between researchers from the U.S. and Latin America who specialize in the chemistry of surfaces, with special emphasis on catalysis.

Rodriguez has published more than 250 articles in top scientific journals, and he has presented more than 60 invited talks at universities and international conferences. He serves on the editorial board of the journal Surface Science and as guest editor for the Journal of Molecular Catalysis. Since 2005, Rodriguez has been an adjunct professor of chemistry at Stony Brook University.

NOTE TO LOCAL EDITORS: José Rodriguez is a resident of Port Jefferson, NY.