Working Toward New Energy With Electrochemistry

BOSTON, MA - In an effort to develop alternative energy sources such as fuel cells and solar fuel from "artificial" photosynthesis, scientists at the U.S. Department of Energy's Brookhaven National Laboratory are taking a detailed look at electrons - the particles that set almost all chemical processes in motion.

Electron transfer plays a vital role in numerous biological processes, including nerve cell communication and converting energy from food into useful forms. It's the initial step in photosynthesis as well, where charges are first separated and the energy is stored for later use - one of the concepts behind energy production using solar cells. Understanding and controlling the movement of electrons through individual molecules also could allow for the development of new technologies such as extremely small circuits, or help scientists find catalysts that give fuel cells a much-needed boost in efficiency and affordability. Three Brookhaven chemists will discuss how these applications are related to their most recent findings at the 234th National Meeting of the American Chemical Society. The details of their research are highlighted below:

A Different Way to Turn Water into Fuel 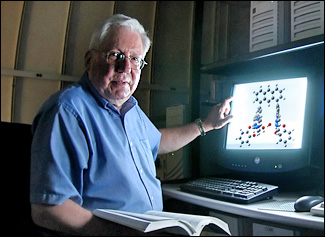 Brookhaven chemist James Muckerman works with a team of researchers to design catalysts inspired by photosynthesis, the natural process by which green plants convert sunlight, water, and carbon dioxide into oxygen and carbohydrates. The goal is to design a bio-inspired system that can produce fuels like methanol or hydrogen directly from carbon dioxide or water, respectively, using renewable solar energy. To replicate one of the important steps in natural photosynthesis, Muckerman uses molecular complexes containing the metal ruthenium as catalysts to drive the conversion of water into oxygen, protons, and electrons. Specifically, Muckerman's group has set out to determine the electronic activity of a catalyst recently developed in Japan. Unlike previous ruthenium catalysts, which have a very short life, this catalyst has quinone ligands attached to each of its ruthenium centers. These electron-accepting molecules appear to make the catalyst very active and stable. The challenge is to determine exactly how the catalyst works.

"It was a controversial result," said Muckerman, who compares the lab results to calculations based on theory. "I believe that the reaction occurs by ruthenium-mediated electron transfer from water molecules bound to the metal centers to the quinone ligands. These electron transfers are initiated by proton transfers from the bound water moieties to the aqueous solution. The ruthenium atoms maintain the same charge state during the entire catalytic cycle, indicating that this catalyst works in a totally different way than the other catalysts."

This result could open up a new direction for designing future catalysts. Muckerman will present further details during his talk at 1:20 p.m. Eastern Time in the room 160C of the Boston Convention and Exhibition Center. 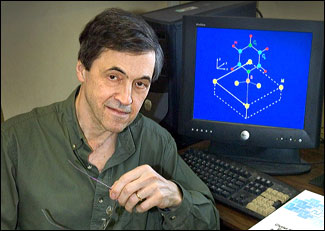 Using organic molecules as electronic components in nanoscale devices could lead to various technological advances including small-scale circuits for improving solar cells. One of the most important issues in this field is the role of molecule-metal contact and the electron transfer that occurs between the two. With this idea in mind, Brookhaven chemist Marshall Newton and former Brookhaven research associate Vasili Perebeinos studied the electronic activity involved in the self-assembly of sulfur-capped organic molecules supported on a gold surface. Their results were surprising:

"The bottom line is that the electrical action in the formation of this interface has already happened within the organic layer, without direct involvement of the metal," said Newton, who develops models to understand these interactions in molecular systems. "That's somewhat unexpected because people typically say that the big electrical action involves charge moving from or between the organic part and the metal surface. But in this case, the electronic rearrangement occurs internally during the process of bringing all of these organic chains together before they are in contact with the metal."

Newton believes this phenomenon is caused by the need to reduce electrical repulsions between the side-by-side organic chains. He'll discuss these findings at 10:15 a.m. Eastern Time in room 160C of the Boston Convention and Exhibition Center.

An Affordable Alternative for Fuel Cells

Platinum is the most efficient metal electrocatalyst for accelerating chemical reactions in fuel cells. However, the reactions caused by the expensive metal are slow, and undesired side reactions often degrade the electrode. In an effort to find an affordable alternative with high activity and stability, Brookhaven chemist Ping Liu and her research group are introducing ruthenium oxide to the electronic system. By carefully forming just one thin layer of platinum on a ruthenium-oxide surface, Ping has calculated that the oxidation-reduction reaction (the driving force for fuel cells) happens almost as quickly as with a pure platinum catalyst, while using much less of the pricey metal and preventing its dissolution.

"Theoretically, when there's one monolayer of platinum on ruthenium-oxide, it has very close activity to pure platinum," Liu said. "It's not quite as good, but it's very close. This surface should be one of the alternatives we consider for oxidation-reduction catalysts."

Liu will discuss her group's findings at 11:10 a.m. Eastern Time in room 152 of the Boston Convention and Exhibition Center. Future research plans include looking for ways to modify the surface, adding other elements or metals, and further reducing the cost by searching for a surface material less expensive than ruthenium oxide.

The research by Muckerman and Liu is funded through the U.S. Department of Energy's Hydrogen Program, which implements the President's Hydrogen Fuel Initiative, a five-year program that began in 2003 to sponsor research, development, and demonstration of hydrogen and fuel cell technologies. Specifically, the funding derived from DOE's Office of Basic Energy Sciences within the Office of Science, which also funds Newton's work.