UPTON, NY - Scientists at the U.S. Department of Energy's Brookhaven National Laboratory have developed new ways to make or modify nanorods and nanotubes of titanium oxide, a material used in a variety of industrial and medical applications. The methods and new titanium oxide materials may lead to improved catalysts for hydrogen production, more efficient solar cells, and more protective sunscreens. The research is published in two papers now available online, one in Advanced Materials (August 22, 2007), and the other in the Journal of Physical Chemistry (September 8, 2007). 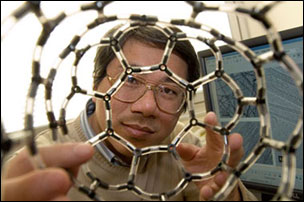 In the first study, the scientists enhanced the ability of titanium oxide to absorb light.

"Titanium dioxide's ability to absorb light is one the main reasons it is so useful in industrial and medical applications," said Wei-Qiang Han, a scientist at Brookhaven's Center for Functional Nanomaterials (CFN) and lead author on both papers. It is used as a photocatalyst for converting sunlight to electricity in solar cells and also has applications in the production of hydrogen, in gas sensors, in batteries, and in using sunlight to degrade some environmental contaminants. It is also a common ingredient in sunscreen.

Many scientists have explored ways to improve the light-absorbing capability of titanium oxide, for example, by "doping" the material with added metals. Han and his coworkers took a new approach. They enhanced the material's light-absorption capability by simply introducing nanocavities, completely enclosed pockets measuring billionths of a meter within the 100-nanometer-diameter solid titanium oxide rods.

Transmission electron micrographs of nanocavity-filled titanium oxide nanorods (bottom) and iron-doped titanate nanotubes (top). Both are being investigated as photocatalysts for reactions to produce hydrogen gas. The improved light-absorption of the nanocavity-filled nanorods also makes them ideal new materials for sunscreen. (Click image for hi-res version)

"Our research demonstrates that titanium oxide nanorods with nanocavities can dramatically improve the absorption of UVA and UVB solar radiation, and thus are ideal new materials for sunscreen," Han said.

The cavity-filled nanorods could also improve the efficiency of photovoltaic solar cells and be used as catalysts for splitting water and also in the water-gas-shift reaction to produce pure hydrogen gas from carbon monoxide and water.

In the second paper, Han and his collaborators describe a new synthesis method to make iron-doped titanate nanotubes, hollow tubes measuring approximately 10 nanometers in diameter and up to one micrometer (one millionth of a meter) long. These experiments were also aimed at improving the material's photoreactivity. The scientists demonstrated that the resulting nanotubes exhibited noticeable reactivity in the water-gas-shift reaction.

"Although the activity of the iron-doped nanotubes was not as good as that of titanium oxide loaded with metals such as platinum and palladium, the activity we observed is still remarkable considering that iron is a much less expensive metal and its concentration in our samples was less than one percent," Han said.

The scientists also observed interesting magnetic properties in the iron-doped nanotubes, and will follow up with future studies aimed at understanding this phenomenon. 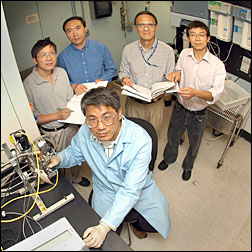 Materials developed in these studies were analyzed using several of Brookhaven Lab's unique tools and methods for the characterization of nanostructures, including transmission electron microscopy and various techniques using x-ray and infrared beams at the Lab's National Synchrotron Light Source (NSLS).

This research, which has clear connections to improved energy technologies, was funded by the Office of Basic Energy Sciences within the U.S. Department of Energy's Office of Science.

Collaborators on the Advanced Materials paper include Lijun Wu, Robert F. Klie, and Yimei Zhu, all of Brookhaven's Center for Functional Nanomaterials (CFN). For the Journal of Physical Chemistry paper, collaborators include Brookhaven chemists Wen Wen and Jonathan Hanson; Ding Yi, Mathew Maye, and Oleg Gang of the CFN; Zhenxian Liu of the Carnegie Institution of Washington; and Laura Lewis, formerly at the CFN and now at Northeastern University.