UPTON, NY - A team of researchers at the U.S. Department of Energy's Brookhaven National Laboratory have overcome a major obstacle for using refractive lenses to focus x-rays. This method will allow the efficient focusing of x-rays down to extremely small spots and is an important breakthrough in the development of a new, world-leading light source facility that promises advances in nanoscience, energy, biology, and materials research. 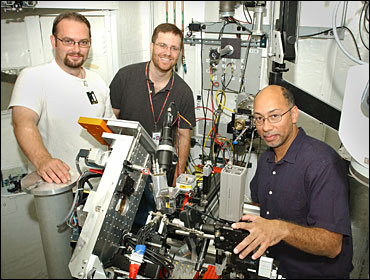 At Brookhaven's National Synchrotron Light Source (NSLS), the scientists exceeded a limit on the ability to focus "hard," or high-energy, x-rays known as the "critical angle." Their results are described online in the September 28, 2007, edition of Physical Review Letters.

The critical angle is the maximum angle that light can be deflected, or bent, by a single surface. Imagine a beam of laser light traveling toward a glass lens. Depending on the characteristics of the lens material and the angle at which the beam is pointed, the light can be refracted, that is, transmitted through the lens but deflected. However, when this light approaches the lens at angles less than the critical angle, the beam does not pass through the lens but is instead reflected. This results in a maximum deflection angle for light that passes through the lens.

The maximum deflection angle determines the minimum spot size to which x-rays can be focused. This poses a problem for researchers who are using x-rays to study molecules, atoms, and advanced materials at the nanoscale - on the order of billionths of a meter. Such small subjects require tightly focused beams.

"One measure of the quality of an x-ray optic is how small a focused spot it can make," said NSLS researcher Ken Evans-Lutterodt. "The problem is that nature does not allow a single lens to deflect the x-rays very much. This limits how small of a spot you can create, and this translates to some fuzziness in the image. To get a sharper image, you need a lens that's more able to deflect the x-rays."

In 2003, a trio of Brookhaven researchers - Evans-Lutterodt, Aaron Stein, and James Ablett - were the first to notice the critical angle limit while investigating the properties of a so-called kinoform lens for focusing hard x-rays. This efficient type of refractive lens is similar to those found in lighthouses. The research team proposed a solution to the critical angle problem of a compound kinoform lens, and both the problem and proposed solution were also suggested later by other researchers in the field.

In the current publication, the researchers implemented their idea by creating a compound lens from a series of four kinoform lenses placed one after the other. Using this setup at NSLS beamline X13B, they showed that the critical angle can be surpassed with hard x-rays, while still focusing like a single lens.

"Thanks to the excellent fabrication resources at Brookhaven's Center for Functional Nanomaterials and at Alcatel-Lucent, we are able to fabricate the lenses to the precision required," Stein said.

This is an important step for the National Synchrotron Light Source II (NSLS-II), a state-of-the-art synchrotron facility that will produce x-rays up to 10,000 times brighter than those generated by the current NSLS and could lead to advances such as alternative-energy technologies and new drugs for fighting disease. One of the major goals of the facility is to probe materials and molecules with just one-nanometer resolution - a capability needed to study the intricate mechanisms of chemical and biological systems.

"Without exceeding the critical angle, the refractive lens resolution would be limited to 24 nanometers or more," Ablett said. "Even though in this experiment we just barely exceeded this limit, we've shown that it can be done. This is just the first step."

Next, the researchers will measure the resolution their new lens system produces, and will continue to fabricate and test optics that push further beyond the critical angle, and closer to the one-nanometer benchmark.

"We've broken the barrier, now there's still more work to be done to get down to those small x-ray spots," Evans-Lutterodt said. "Hopefully this will be one of the routes that NSLS-II and others will use."

Natasha Bozovic, from San Jose State University, also collaborated on this research. Funding was provided by the Office of Basic Energy Sciences within the U.S. Department of Energy's Office of Science.