More Sun Exposure May Be Good for Some People

UPTON, NY - A new study by scientists at the U.S. Department of Energy's Brookhaven National Laboratory and colleagues in Norway suggests that the benefits of moderately increased exposure to sunlight - namely the production of vitamin D, which protects against the lethal effects of many forms of cancer and other diseases - may outweigh the risk of developing skin cancer in populations deficient in vitamin D. The study will be published online in the Proceedings of the National Academy of Sciences the week of January 7, 2008. 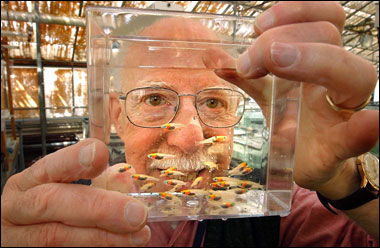 Richard Setlow with a species of fish that he previously used to demostrate how exposure to sunlight is related to skin caner.

"We know that solar radiation is the leading cause of skin cancer," said communicating author Richard Setlow, a Senior Biophysicist Emeritus at Brookhaven and a well-known expert on the link between solar radiation and skin cancer. Setlow's group was the first to establish that ultraviolet A (UVA) radiation and visible light are the primary causes of malignant melanoma, the deadliest form of skin cancer. He and his colleagues emphasize that people need to protect themselves from the harmful effects of sun exposure.

But solar radiation is also a major, if not the main, source of vitamin D in humans. In the presence of sunlight, the body converts certain precursor chemicals to active vitamin D.

"Since vitamin D has been shown to play a protective role in a number of internal cancers and possibly a range of other diseases, it is important to study the relative risks to determine whether advice to avoid sun exposure may be causing more harm than good in some populations." The concern, he says, is particularly great in populations from northern latitudes, such as Scandinavia, where sun exposure is extremely limited.

In the current study, Setlow and his colleagues used a model incorporating information on solar radiation intensity and a vertical cylinder shape to represent the human body's skin surface to calculate the relative production of vitamin D via sunlight as a function of latitude, or distance from the equator. The cylindrical model more realistically represents human body sun exposure than flat surface exposure measurements used in previous models. The scientists also examined the incidence of and survival rates for various forms of cancer by latitude.

"There is a clear north-south gradient in vitamin D production," Setlow says, "with people in the northern latitudes producing significantly less than people nearer the equator."

In populations with similar skin types, there is also a clear increase in the incidence of all forms of skin cancer from north to south. "This gradient in skin cancer rates indicates that there is a true north-south gradient in real sun exposure," Setlow says.

The scientists also found that the incidence rates of major internal cancers such as colon cancer, lung cancer, and cancers of the breast and prostate also increased from north to south. However, when the scientists examined the survival rates for these cancers, they found that people from the southern latitudes were significantly less likely to die from these internal cancers than people in the north.

"In previous work, we have shown that survival rates for these cancers improve when the diagnosis coincides with the season of maximum sun exposure, indicating a positive role for sun-induced vitamin D in prognosis - or at least that a good vitamin-D status is advantageous when combined with standard cancer therapies," Setlow says. "The current data provide a further indication of the beneficial role of sun-induced vitamin D for cancer prognosis."

So, how can people get the benefits of vitamin D without running the risk of deadly skin cancer?

"As far as skin cancer goes, we need to be most worried about melanoma, a serious disease with significant mortality," Setlow says.

Increased UVB exposure may result in an increase in non-melanoma skin cancers. But these are relatively easy to cure and have very low mortality rates compared with the internal cancers vitamin D appears to protect against, Setlow adds.

Another option would be to increase vitamin D consumption while continuing to wear sunscreen. Vitamin D is easily accessible in many foods and liquids, such as cod liver oil and milk, and in dietary supplements.

In addition to Setlow, the research team includes Johan Moan and Alina Carmen Porojnicu of the Institute for Cancer Research in Oslo, Norway, and Arne Dahlback of the University of Oslo. Moan also holds an appointment at the University of Oslo. The research was funded by Sigval Bergesen D.Y. og hustru Nankis Foundation, by The Research Foundation of The Norwegian Radiumhospital and by Helse-Sør Norway. Richard Setlow's laboratory and facilities at Brookhaven Lab are supported by the Office of Biological and Environmental Research within the U.S. Department of Energy's Office of Science.