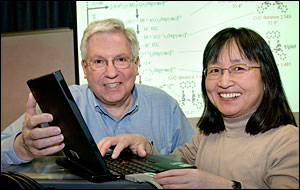 UPTON, NY - Scientists at the U.S. Department of Energy's Brookhaven National Laboratory and the Institute for Molecular Science in Japan are trying to mimic part of the complex natural process of photosynthesis with the goal of making non-polluting fuels such as hydrogen, for example, for use in fuel cells. In the March 10, 2008, web release of the journal Inorganic Chemistry containing a Forum on "Making Oxygen," the scientists report they were able to mimic the "water oxidation catalysis" that occurs in natural photosynthesis.

Water oxidation, a step in photosynthesis, is one part of "water-splitting" — splitting water into hydrogen and oxygen, a very complex process. Water-splitting requires a large amount of energy from sunlight and metal catalysts to activate the very stable water molecules. It occurs as two separate "half" reactions: water oxidation produces the oxygen, along with protons and electrons; these protons and electrons are then combined to make molecular hydrogen.

Brookhaven chemist Etsuko Fujita, co-author on the paper, explains how the Brookhaven team has been collaborating with Japanese scientists Koji Tanaka and Tohru Wada, who in 2001 discovered a novel catalyst that appears quite promising for water oxidation.

"We are combining theoretical and experimental studies to determine how this ruthenium complex with bound quinone molecules efficiently catalyzes water oxidation to form oxygen," she said.

To accomplish the water-oxidation reaction, Tanaka and Wada immobilized the ruthenium catalyst on an electrode, placed it in an aqueous solution, and applied a voltage, resulting in a rapid turnover for oxidizing water to oxygen. The research team, which also includes Brookhaven's Dmitry Polyansky, continues to collaborate on further studies to understand the details of how the catalyst works.

The scientists have discovered that when the protons from two water molecules are removed due to acid-base reactions in solution, four electrons are transferred to electron receptor sites in the catalyst. Once all the protons are removed, the theoretical calculations predict that an oxygen-oxygen bond is formed.

What makes their catalyst "novel" is that in most metal-based compound catalysts these electron receptor sites are located on the metal atoms, but in this ruthenium complex the receptor sites are on the quinone molecules. More theoretical and experimental studies will be needed to fully understand and improve the mechanisms of quinone-containing catalysts.

"The ruthenium in our catalyst is somewhat expensive, so we plan to continue our studies with more economical catalysts incorporating less-expensive metals," Muckerman said.

Hydrogen made by water splitting could also be used directly for combustion in a future hydrogen-based economy.

The U.S. Department of Energy's Office of Basic Energy Sciences (BES) within its Office of Science funded this basic research at Brookhaven Lab. The research is part of the BES Hydrogen Fuel Initiative program.