The following news release was issued today by Princeton University. It describes research on a new pairing mechanism for high-temperature superconductors. Researchers in the Condensed Matter Physics and Materials Science Department at the U.S. Department of Energy's Brookhaven National Laboratory worked with the Princeton team to make the high-quality, single crystals of superconducting material essential for the study. "Such high-quality, single crystals are at the very heart of scientific research successes in the field of condensed matter experimental physics," said Brookhaven physicist Genda Gu, who led the Brookhaven team. Ph.D. students Jinsheng Wen and Zhijun Xu also participated in this research at Brookhaven. The Brookhaven team spent two years to grow and prepare the crystals using state-the-of-art floating zone machines and a high-pressure annealing process. For more information about Brookhaven's role, contact Karen McNulty Walsh, kmcnulty@bnl.gov, 631-344-8350.

For more than 20 years since the discovery of high-temperature superconductivity, scientists have been debating the underlying physical mechanism for this exotic phenomenon, which has the potential to revolutionize the electrical power distribution network.

They've argued at length over the origin of what some have imagined to be a microscopic "glue" that binds the electrons into pairs so they glide effortlessly, overcoming their normal repulsion in typical metals. Is it magnetism or vibrations in the lattice structure of the material or something else?

The two figures show the results obtained with a specialized scanning tunneling microscope at temperatures well above and well below when the electrons pair up in high temperature superconductors. The top figure shows an atomic scale map of the strength (delta) for pairing of electrons while superconducting, in which red shows the strongest pairing regions and blue the weakest. The bottom figure shows a measurement related to electron-electron interaction on the exact same atomic sites at a temperature, well above the superconducting transition temperature, when electrons repel one another. The surprising connection between these two measurements is the main finding of the paper published in Science by the team from Princeton.

Now, provocative results yielded by two years of experiments carried out at Princeton University have a group of scientists saying that high-temperature superconductivity does not hinge on a magical glue binding electrons together. The secret to superconductivity, they say, may rest instead on the ability of electrons to take advantage of their natural repulsion in a complex situation.

Reporting in the April 11 issue of the journal Science, the team has uncovered an unexpected connection between the behavior of electrons when they pair up — a key requirement for superconductivity — and when the electrons are repelling one another at temperatures far above the critical temperature at which a material superconducts. Their experiments have shown that electrons exhibit a characteristic behavior when repelling each other that, strangely enough, signals their special talent for pairing and flowing without resistance when these complex materials are cooled to low temperatures.

"It appears that the electrons with the strongest repulsion in one situation are the most adept at superconductivity in another," said Ali Yazdani, a professor of physics at Princeton and the senior author of the paper. "It's counterintuitive, but that's what's happening."

High-temperature superconductors are ceramic materials that can conduct electricity across huge distances without losing any energy. They are also relatively cheap to make and have enormous potential in many areas of technology.

Superconductivity was first observed in mercury in 1911 by the Dutch physicist Heike Kamerlingh Onnes. When he cooled the material to the temperature of liquid helium, 4 degrees Kelvin (-452F, -269C), its resistance suddenly disappeared. Scientists in later years would come to understand low-temperature superconductivity as a phenomenon that occurs when electrons interact with vibrations of the material's lattice structure and join into pairs that are able to travel through a conductor without being scattered by atoms.

The copper oxide, "high-temperature" superconductors that have been intensely studied since they were discovered in 1986 can become superconducting at higher temperatures than the older materials — up to about 150 Kelvin (-253F, -123C) — making them of greater interest to industry. They can be cooled with liquid nitrogen, which is cheaper than liquid helium. But do electrons bond in these materials, scientists have wondered, the same general way as in the lower temperature materials?

The team with the new results has determined they do not.

The findings came as a result of an effort to track down physical indicators of the microscopic "glue," which in the case of low-temperature superconductors are known to show up in delicate measurements of quantum properties of superconducting electrons. In the 1960s, scientists at Bell Laboratories in New Jersey, conducting such experiments, proved beyond a doubt that lattice vibrations bind electrons, paving the way for them to flow in low-temperature superconductors. 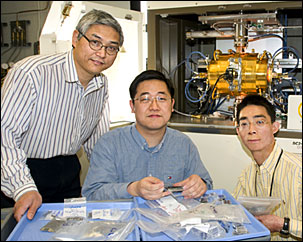 Until now, scientists have not been able to repeat the Bell Labs experiments in high-temperature superconducting material. The ceramic conductors, which consist of up to five different elements, have been particularly challenging to prepare for such precision measurements. Researchers have found it impossible to perform similar measurements on the highest quality crystals without destroying their superconducting properties. The Princeton team triumphed by taking a novel approach and using a specialized scanning tunneling microscope with unique tracking capabilities. This technique allowed the researchers to fix their sight on the same atom, as the electrons moving in the sample went from repelling each other at high temperatures to pairing up at low temperatures.

Other recent searches in the microscopic realm for "glue," using different techniques, have turned up conflicting evidence. "This is a very controversial subject, partly because of the complexity of the material, which has a varying chemical structure on the atomic scale," Yazdani said.

"What we have found is that the traditional signatures of what some might call the 'glue' are there — we can measure them with high accuracy on the atomic scale," he added. "They don't seem to control the formation of the superconducting pairs, though. They are more like spectators."

Having developed the ability to measure with high precision how nature allows electron pairs to form, the team, which included postdoctoral fellow Abhay Pasupathy and graduate students Aakash Pushp and Kenjiro Gomes, looked to see if there were other types of experimental signatures that could give clues to the mechanism of pairing. Their microscope gave them a big advantage as it allowed them to visualize electrons' quantum behavior in these complex materials with varying chemical structure on the atomic scale. To their surprise, they found that atomic locations of the sample in which electrons show signs of stronger repulsion for each other — at very high temperature — formed the strongest bonded pairs of electrons at low temperatures. This observation runs contrary to the behavior of electrons in low-temperature superconducting materials, in which electron-electron repulsion is not conducive to electron pairing up and superconductivity.

They found that when the samples were heated up to very high temperatures at which electrons no longer paired up, the electrons that had been superconducting at colder temperatures exhibited unique quantum properties at warmer temperatures indicating they possessed extremely strong repulsive forces.

While these experiments alone may not end the 20-year debate on what causes high-temperature superconductivity, they have at least one long-time proponent of the importance of electron-electron repulsion in the mechanism paying close attention. "The data is a gold mine which we're only beginning to exploit," said Philip Anderson, Princeton's Joseph Henry Professor of Physics, Emeritus, who won a physics Nobel in 1977 and was not involved in the research.

The scientists studied a compound made of strontium, bismuth, calcium and copper oxide. They used a specially rigged scanning tunneling microscope with a probe so small its tip is a single atom wide. Positioned a hair's breadth above the sample, the device can move in increments smaller than an atom and measure current that flows between the tip and the surface.

The team also included other researchers from Princeton, the University of Illinois-Urbana/Champaign and the U.S. Department of Energy's Brookhaven National Laboratory, as well as Osaka University and the Central Research Institute of Electric Power Research, both in Japan.

The Princeton scientists worked in the Princeton Nanoscale Microscopy Laboratory, a state-of-the-art, ultra-low-noise lab constructed at the site of an old cyclotron in the basement of Jadwin Hall. Yazdani and his group study condensed matter physics, searching for simple, unifying explanations for complicated phenomena observed in liquids and solids.

Scientists hope the findings will help crack the 20-year puzzle and may also boost efforts to find new varieties of materials that become superconducting at ever-higher temperatures. Such materials would make practical the dream of a new electrical world with high-powered computers, magnetically levitating trains and super-efficient power transmission lines.

The work was supported by the U.S. Department of Energy's Office of Basic Energy Sciences and by the National Science Foundation through the Princeton Center for Complex Materials.