UPTON, NY - If you live on Long Island and are in competition to build the best city of the future incorporating nanotechnology, where do you go to find out what, exactly, is technology at the nanoscale? Teacher Julia Johnson, whose 7th and 8th grade students are members of one of the two Islip Middle School teams that entered the 2007-08 Future City™ competition, turned to the U.S. Department of Energy's Brookhaven National Laboratory, home of the recently opened Center for Functional Nanomaterials (CFN). 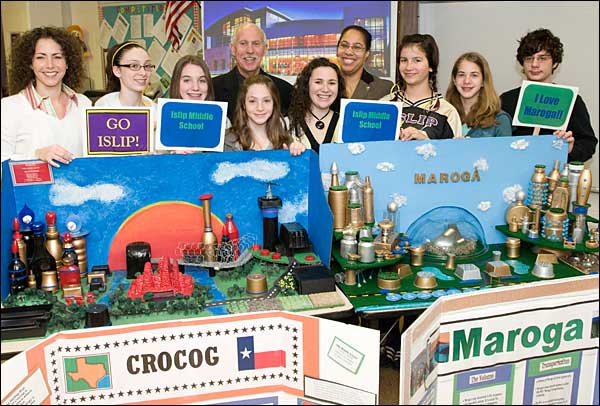 Brookhaven Labs Michael Schaeffer (back row, left), an architect and the facility project manager who oversaw the construction of the Labs Center for Functional Nanomaterials (shown in the background), congratulates two teams of Islip Middle School students who brought home awards from the 2007-08 New York City regional Future City™ competition, sponsored by the National Engineers Week Foundation. In the foreground are models of Islips two award-winning Future City™ entries, which, according to this years contest rules, had to incorporate nanotechnology into their design. Behind the scale models are the winners and their teachers: (from left) Islip Middle School teacher Valerie Gallagher who coached the "Peoples Choice"-winning "Crocog" team of 8th graders Clarice Oscher and Rebecca Goess, and 7th grader Olivia Carroll; and Islip Middle School teacher Julia Johnson who coached the NYC regional first-place "Maroga" team of 7th graders Madison Schaefer, Gabby Rocco and Robert Rotolo. Mr. Schaeffer introduced the Future City™ competitors to nanotechnology concepts through a presentation to the classes, while Laureen Pellegrino (back row, right) of BAE Systems, Greenlawn, was one of two engineer-mentors who assisted the students in developing their entries. (Click on the image to download a high-resolution version.)

This was the 16th year that the annual Future City™ competition has been sponsored by the National Engineers Week Foundation and the second year that students of Mrs. Johnson have entered the contest, but it was the first time that the nation's budding middle-school engineers and architects have been asked to incorporate nanotechnology into their imaginary cities' designs.

"I had heard that Brookhaven Lab was involved in the field of nanoscience, but I had no idea of the extent of their program," says Mrs. Johnson. "By sending their staff into my classroom and inviting us to the Center for Functional Nanomaterials, Brookhaven Lab provided an enriching experience that helped my students make the connection between real world science and technology and their 'Future City' project."

Built to find nanoscale-structured solutions to U.S. energy problems, the CFN is a state-of-the-art, $41.7-million facility where scientists explore the structure and function of materials on the scale of a nanometer-which is a billionth of a meter. The CFN is one of five nanoscience research centers built by the U.S. Department of Energy (DOE), the only DOE nanocenter in the Northeast U.S. and the only Long Island facility dedicated to research and development at the nanoscale. Using specialized laboratories and instruments for studying materials down to their atoms, CFN scientists restructure materials atom by atom, with the goal of making stronger, lighter or more energy-efficient materials for the benefit of U.S. industry, business and consumers.

Through the Laboratory's speakers' bureau, Mrs. Johnson came to BNL to be introduced to facility project manager Michael Schaeffer, who had overseen construction of the 94,500-square-foot, soaring two-story, futuristic looking CFN building. An architect, Mr. Schaeffer then brought his expertise and experience into Mrs. Johnson's Islip Middle School classroom. There he shared his knowledge of nanoscience, building design and construction, nanotechnology controls, and LEED (Leadership in Energy & Environmental Design) "green" building standards with two Future City™ teams of three students each.

Inspired by Mr. Schaeffer and mentored by engineers Laureen Pellegrino of BAE Systems, Greenlawn, and Janine Parks of the Long Island regional office of the New York State Department of Transportation, Babylon, the two teams each worked collectively to fulfill this year's Future City™ requirements. These included designing a 22nd century city using SimCity 3000 software, building a scale model of the city, and writing an essay on "Using Nanotechnology to Monitor City Structures and Systems."

The result: Mrs. Johnson's "Maroga" team of Gabby Rocco, Robert Rotolo and Madison Schaefer won the New York City regional competition held this January. In February, team Maroga was sent to the national finals in Washington, D.C., which, this year, was won by students from Louisiana.

Also at the NYC regional, Islip Middle School teacher Valerie Gallagher's "Crocog" team of Olivia Carroll, Rebecca Goess and Clarice Oscher was presented with the "People's Choice" award because their entry was the favorite of the majority of the competitors.

Between the regional and national competitions, both teams were rewarded for their hard work with a CFN tour, to see for themselves where DOE-funded nanoscience is being employed today to develop materials to be the basis of tomorrow's energy technology powering the nation's future cities.