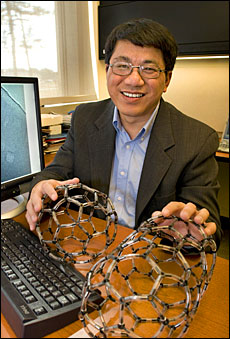 UPTON, NY - Weiqiang Han, a scientist at the U.S. Department of Energy's (DOE) Brookhaven National Laboratory, will be honored as Brookhaven's "Inventor of the Year" on April 25, in Columbus, Ohio, by Battelle, a global science and technology company that develops and commercializes technology. Battelle and Stony Brook University comprise Brookhaven Science Associates, the company that manages Brookhaven Lab.

Working at Brookhaven's Center for Functional Nanomaterials, Han and his team developed a method to make new nanostructures - nanorods of titanium oxide with nanocavities in them. These nanocavities, or empty holes, measure from five to thirty nanometers within the 100-nanometer-diameter titanium oxide rods. (A nanometer is a billionth of a meter.)

"I am excited about the new possibilities for this material," Han said. "This new nanostructure may make titanium oxide much more useful for many applications, including sunscreens, solar panels, hydrogen production and water purification."

Weiqiang Han earned a B.A. in physics and a Ph.D. in materials science and engineering from Zhejiang University, China, in 1985 and 1995, respectively. From 1995 to 1996, he was an engineer at the Chinese Academy of Science's Beijing Vacuum Laboratory. In 1996 he took a postdoctoral position at Tsinghua University in Beijing, and, in 1998, he became a postdoctoral associate at the National Institute for Research in Inorganic Materials in Tsukuba, Japan. From 1999 to 2000, he was a Humboldt Research Fellow at the Max-Planck Institute for Metal Materials, in Stuttgart, Germany.

Han came to the U.S. in 2000 to become an associate specialist at the University of California, Berkeley. He joined Brookhaven Lab's Center for Functional Nanomaterials in 2004, where he is currently an associate scientist.

The Office of Basic Energy Sciences within the U.S. Department of Energy funded Han's research. His technology is patented by Brookhaven Science Associates and is available for licensing by industry.