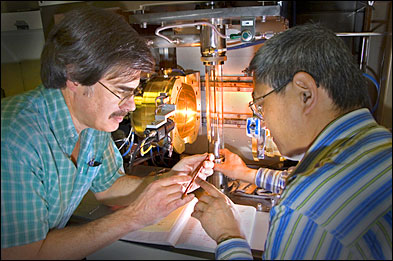 UPTON, NY — Scientists studying a material that appeared to lose its ability to carry current with no resistance say new measurements reveal that the material is indeed a superconductor — but only in two dimensions. Equally surprising, this new form of 2-D superconductivity emerges at a higher temperature than ordinary 3-D superconductivity in other compositions of the same material. The research, conducted in part at the U.S. Department of Energy’s (DOE) Brookhaven National Laboratory, will appear in the November 2008 issue of Physical Review B, and is now available online.

“Our basic research goal is to understand why and how these materials act as superconductors,” said Brookhaven physicist John Tranquada, who led the research. “The ultimate practical goal would be to use that understanding to develop improved bulk superconductors — ones that operate at temperatures warm enough to make them useful for real-world applications such as high-efficiency power lines.”

The basic idea behind superconductivity is that electrons, which ordinarily repel one another because they have like charges, pair up to carry electrical current with no resistance. Conventional metallic superconductors do this at temperatures near absolute zero (0 kelvin or -273 degrees Celsius), requiring costly cooling systems. More recently, scientists have discovered materials that transition to superconductivity at higher temperatures, sparking the hope for future room-temperature devices.

Tranquada and his colleagues have been studying a layered material made of lanthanum, barium, copper, and oxygen (LBCO) where the ratio of barium to copper atoms is exactly 1 to 8. At a range of compositions with lower and higher levels of barium, LBCO acts as a “high-temperature” superconductor, with a peak operating temperature of 32 K. But at the mysterious 1:8 ratio, the transition temperature at which superconductivity sets in drops way down toward absolute zero.

This material exhibits another interesting property: an unusual pattern of charge and magnetism known as “stripes,” which many theorists have long assumed was incompatible with superconductivity.

“For a superconductor, you need charges to be paired and moving coherently to carry a current with no resistance. On the other hand, the ‘stripe’ order suggests the charges are localized in relatively fixed positions,” Tranquada explained. So the presence of alternating stripes of magnetism and charge — which are most apparent in the composition with the 1:8 ratio of barium to copper — seems perfectly consistent with the fact that LBCO’s superconductivity “disappears” at exactly that point.

At the same time, Brookhaven physicist Markus Hücker, along with Qiang Li, measured the onset of weak “diamagnetism,” an effect in which magnetic fields are pushed out of the sample. “This is one of the key properties of a superconductor — the Meissner effect,” Tranquada said.

Like the drop in resistance, the Meissner effect occurred in only two dimensions, within the planes.

“Combining these results with a variety of other measurements, we now propose that there is a subtle form of superconductivity confined within the two-dimensional planes of copper oxide in LBCO 1:8,” Tranquada said.

“For some reason,” he continued, “the material is unable to coherently couple that superconductivity between the planes. It’s as if you were in a skyscraper where the elevators don’t work and there aren’t any stairs. You can move within the same floor but you can’t get from one floor to the next. That’s the case for the electron pairs in this material; they can’t move from one layer to the next.”

In addition to Tranquada, Hücker, and Li, co-authors on this study include: Genda Gu, Qian Jie, Jinsheng Wen, Guangyong Xu, Zhijun Xu, and Juan Zhou, all of Brookhaven Lab; Hye Jung Kang of the National Institute of Standards and Technology (NIST); Rüdiger Klingeler and Natalia Tristan of the Leibniz Institute for Solid State and Materials Research, Dresden, Germany; and Martin von Zimmermann of HASYLAB, Germany. This study was supported by DOE’s Office of Science (Basic Energy Sciences) and by the U.S. Department of Commerce.

Earlier studies at Brookhaven Lab had found hints of the unusual superconductivity in LBCO 1:8. These include evidence for an “energy gap” in the material’s electronic spectrum that is ordinarily a telltale sign of superconductivity, even though scientists then believed LBCO 1:8 was not a superconductor [see: Press Release 3 and Press Release 4]. Indeed, these measurements indicate that, in LBCO, the strength of pairing between electrons — a necessary condition for superconductivity — is strongest at the 1:8 composition.

“These measurements were among the clues that got us thinking about the possibility of 2-D superconductivity,” Tranquada said.

Now, Tranquada and his colleagues have begun thinking about ways to harness that strong electron pairing in LBCO 1:8 to get 3-D, or bulk, superconductivity at the higher temperature.

One possible approach would be to combine layers of LBCO 1:8 with another material using thin-film deposition techniques developed at Brookhaven. Very recently Brookhaven scientists have used this technique to introduce an extremely thin area of superconductivity between non-superconducting layers [see: Press Release]. But a similar approach might be used to facilitate the movement of electron pairs between layers, Tranquada said.
Tags: physicssuperconductivity