CERN, the European laboratory for particle physics, has issued the following news release about the restart of the Large Hadron Collider (LHC), the world’s most powerful particle accelerator. In addition to serving as the U.S. host laboratory for the ATLAS experiment at the LHC, Brookhaven plays multiple roles in this massive international undertaking, ranging from construction and project management to data storage and distribution. For more information about Brookhaven's contributions, please visit www.bnl.gov/atlas or contact Kendra Snyder at ksnyder@bnl.gov or 631-344-8191.

Geneva – CERN today confirmed that the Large Hadron Collider (LHC) will restart in 2009. This news forms part of an updated report, published today, on the status of the LHC following a malfunction on 19 September. 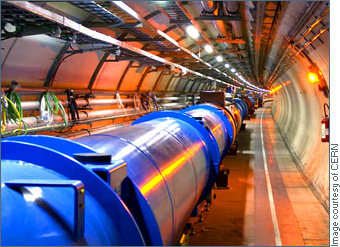 "The top priority for CERN today is to provide collision data for the experiments as soon as reasonably possible," said CERN Director General Robert Aymar. "This will be in the summer of 2009."

The initial malfunction was caused by a faulty electrical connection between two of the accelerator's magnets. This resulted in mechanical damage and release of helium from the magnet cold mass into the tunnel. Proper safety procedures were in force, the safety systems performed as expected, and no one was put at risk.

Detailed studies of the malfunction have allowed the LHC's engineers to identify means of preventing a similar incident from reoccurring in the future, and to design new protection systems for the machine. A total of 53 magnet units have to be removed from the tunnel for cleaning or repair, of these, 28 have already been brought to the surface and the first two replacement units have been installed in the tunnel. The current schedule foresees the final magnet being reinstalled by the end of March 2009, with the LHC being cold and ready for powering tests by the end of June 2009.

"We have a lot of work to do over the coming months," said LHC project Leader Lyn Evans, "but we now have the roadmap, the time and the competence necessary to be ready for physics by summer. We are currently in a scheduled annual shutdown until May, so we're hopeful that not too much time will be lost."

Full details of the timetable to restart are available in the report published today (PDF).