“About 250,000 Americans undergo lumbar spine fusion surgeries each year to treat lower back pain,” said Tom Rouche, BioSET President and CEO. “We have developed a novel combination medical device, called AMPLEX, that incorporates B2A osteo-inductive growth factor with an ultra-high grade ceramic bone substitute for use in this type of surgery. Preclinical studies have found that it is a safe and highly effective.”

B2A enhances the effects of a tissue growth factor known as bone morphogenetic protein 2, or BMP-2. BMPs are a family of proteins in the human body responsible for the proliferation, repair and differentiation of cells in many tissues, including bone. 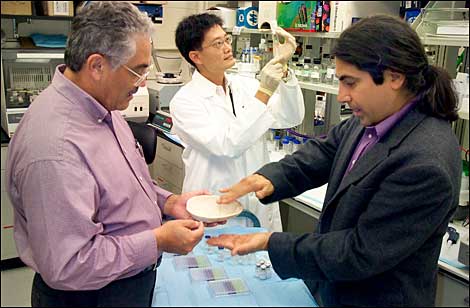 (From left) BioSET's Paul Zamora and Brookhaven National Laboratory's Xinhua Lin and Louis Peña prepare a synthetic peptide for use in bone-healing experiments that involve the bone growth factor BMP-2.

Brookhaven Lab scientist Louis Peña developed B2A with BioSET, and he performed the initial studies at Brookhaven. "I became interested in bone growth factors after NASA built a radiation research facility at Brookhaven,” Peña said. “Weightlessness in space causes bone loss, and cosmic radiation can cause damage to cells, so I thought I might be able to study the interaction of the two. In setting up for that, I developed B2A and couldn’t ignore its biomedical applications, so I focused on it instead. The ability to shift direction and follow promising leads is important in science, and I've had the freedom to do that at Brookhaven. I am gratified that BioSET has been able to take the B2A technology to a new level of clinical testing."

In recent preclinical studies, University of Iowa researchers used a rabbit model to evaluate AMPLEX spine fusion. They found that it enhanced the fusion, compared to a conventional surgical method that uses the rabbit’s own pelvic bone to form the bone graft. Also, a team of researchers assembled by BioSET reported at a 2008 Orthopedic Research Society meeting that AMPLEX enhanced spine fusion in sheep, a large animal model that more closely resembles the human spine.

BioSET has received approval from the U.S. Food and Drug Administration to initiate a pilot study to evaluate the safety and preliminary efficacy of AMPLEX in approximately 22 patients. Also, the company received approval from Health Canada for a similar study with 24 patients in that country. Each controlled study will compare AMPLEX to an autograft from the patient’s own hip bone in lumbar fusion procedures to treat degenerative disc disease.

The first patient surgery in the Canadian study was performed by a neurosurgeon at Foothills Medical Centre in Calgary, Canada. The surgeon reported that AMPLEX handled as well as other ceramic graft alternatives and the patient was recovering well after surgery. Data from all patients in the clinical studies will be evaluated at six-month intervals.

The initial research to develop B2A was funded by the U.S. Department of Energy’s Office of Science, the National Institutes of Health, and BioSET. The patent on B2A (Patent # US 7,482,427 B2), titled “Positive Modulator of Bone Morphogenic Protein-2,” was issued on January 27, 2009.