Funds are part of $1.2 billion from Recovery Act to be disbursed by Department of Energy’s Office of Science 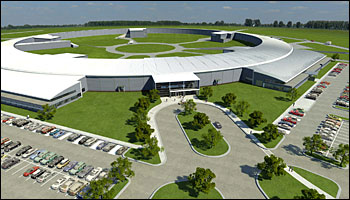 The funds are part of $1.2 billion announced by Secretary of Energy Steven Chu today, during a visit to Brookhaven, from funding allocated under the Recovery Act to DOE’s Office of Science. The funds will support an array of Office of Science-sponsored construction, laboratory infrastructure, and research projects across the nation.

“Leadership in science remains vital to America’s economic prosperity, energy security, and global competitiveness,” said Secretary Chu. “These projects not only provide critically needed short-term economic relief but also represent a strategic investment in our nation’s future. They will create thousands of jobs and breathe new life into many local economies, while helping to accelerate new technology development, renew our scientific and engineering workforce, and modernize our nation’s scientific infrastructure.”

“This increase in federal support for basic research, the hallmark of our work at Brookhaven Lab, will strengthen the country’s global leadership position in science and technology,” said Laboratory Director Sam Aronson. “We welcome the additional funding for Brookhaven Lab, which is part of DOE’s family of national laboratories, key to the nation’s scientific enterprise.”

“Secretary Chu's visit to Brookhaven is a clear sign of how important the lab is to the scientific and competitive research future of Long Island and the entire nation,” commented the senior Senator from New York, Charles Schumer. “We look forward to a long and productive relationship with the new secretary to ensure the Lab – as a critical scientific and economic engine – continues to thrive and grow.”

“These recovery funds will create jobs on Long Island, strengthen the economy and spur the innovations we need to make America strong in the future,” Congressman Timothy Bishop said. “What’s good for Brookhaven is good for Long Island and the nation. This recovery funding will put hundreds of Long Island construction workers, electricians and plumbers to work and allow the lab’s highly skilled and dedicated scientists to continue their cutting edge energy research.”

New York Senator Kirsten Gillibrand said, “This is great news for Brookhaven National Laboratory and for all of Long Island. Brookhaven is a major economic engine for Long Island. This funding will help create jobs and keep Long Island at the forefront of scientific research.”

The Brookhaven allocation is part of $1.2 billion that Secretary Chu announced is being disbursed now in the first installment of a total of $1.6 billion allocated to the DOE Office of Science by Congress under the Recovery Act legislation. Officials are working on details remaining to enable approval and release of the balance of $371 million.

As noted earlier, the largest piece of Recovery Act funds coming to Brookhaven is for accelerated construction of NSLS-II.

Smaller sums are designated for construction of an interdisciplinary science building, general building repairs and improvements on the site, and accelerated acquisition of equipment for the Relativistic Heavy Ion Collider (RHIC), an atom smasher that has garnered international headlines from its revelations of conditions in the early universe.

A break down of the funding follows: