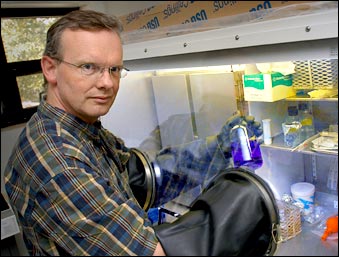 UPTON, NY — An international team of scientists has discovered extensive similarities between a strain of bacteria commonly associated with plants and one increasingly linked to opportunistic infections in hospital patients. The findings suggest caution in the use of the plant-associated strain for a range of biotech applications. The genetic analysis was conducted in part at the U.S. Department of Energy’s (DOE) Brookhaven National Laboratory, and will be published in the July 2009 issue of Nature Reviews Microbiology, now available online.

The research team — which included scientists from Ireland, Austria, and the United Kingdom as well as the U.S. — was investigating the versatility and adaptability of a group of bacteria known as Stenotrophomonas. These bacteria have great metabolic versatility, allowing them to thrive in very diverse environments.

The scientists were particularly interested in comparing two strains of S. maltophilia whose genomes were recently decoded to see why these strains — one isolated as an opportunistic pathogen from a clinical setting (strain K279a), and the other from the roots of poplar trees (strain R551-3) — were so well-suited to their very different environments. Such comparisons are made possible by the high throughput and cost-effective DNA sequencing capacity developed by DOE’s Joint Genome Institute, as well as the Sanger Institute, to help elucidate the role of microorganisms in health, energy, and environmental processes.

“Surprisingly, we observed very few differences between the opportunistic pathogen and the common plant bacterium,” said Brookhaven Lab microbiologist Daniel (Niels) van der Lelie, an expert on soil- and plant-associated microbes, whose team provided the data on the plant-dwelling strain.

For one thing, the scientists found genes that make the bacteria resistant to a wide range of antibiotics in both strains. “This suggests that antibiotic resistance is part of the species’ core genome, and not a trait acquired in the hospital,” van der Lelie said. Multi-drug antibiotic-resistance is one key feature that allows some bacteria to cause deadly infections in hospital patients whose immune systems are often compromised.

The scientists are also intrigued about similarities in the mechanisms the two strains use to colonize their respective environments. For example, both strains possess very similar mechanisms to produce glue-like substances, or biofilms, which allow them to adhere to plant roots, in one case, and medical devices such as ventilation tubes and intravenous catheters, in the other. Such devices are a common source of exposure to opportunistic pathogens for hospital patients.

“Soil microorganisms have long been a source and inspiration for the synthesis of antibiotics,” van der Lelie said. “These finding will help us to better understand the potential of bacteria to produce or become resistant to antimicrobial compounds.”

The findings may also reveal new targets for the development of drugs to interfere with microbes’ ability to form sticky, infection-fostering biofilms, or point the way to closely related non-pathogenic strains that could be useful and benign for biotech applications.

On the other hand, these findings raise the question of whether plants in hospital settings may serve as a reservoir for opportunistic pathogens or antibiotic resistance genes. “This is something that should be looked at more closely by experts in infectious diseases,” van der Lelie said.

The findings also suggest caution in using this particular strain of plant-dwelling bacteria for a range of biotech applications for which it and other plant-associated microbes have shown promise. These include: stimulating plant growth and protecting plants against pathogens; the breakdown of natural and man-made pollutants via bioremediation and phytoremediation; and the production of useful biomolecules such as drugs or industrial enzymes.

Based on the results of this study, van der Lelie’s group has ruled out S. maltophilia for biotech applications designed to increase plant growth. “The work in our lab is presently concentrating on two other plant-growth promoting bacteria, Pseudomonas putida W619 and Enterobacter sp. 638, neither of which contain broad spectrum antibiotic resistance or virulence factors that would allow them to behave as opportunistic pathogens,” he said. “We are certain about this after carefully analyzing the genome sequences of these strains.“

Co-authors on this study include: Robert Ryan and J. Maxwell Dow of University College Cork, Ireland; Sebastien Monchy and Safiyh Taghavi of Brookhaven Lab; Massimiliano Cardinale and Gabriele Berg of Graz University of Technology, Austria; Lisa Crossman of The Wellcome Trust Sanger Institute, UK; and Matthew B. Avison of the University of Bristol, UK.

Brookhaven Lab’s contribution to this study was supported by grants from DOE’s Office of Science, Laboratory Directed Research and Development funds, and by Royalty Funds at Brookhaven Lab under contract with DOE. Sequencing of R551-3 was performed at the DOE Joint Genome Institute. Other aspects of the research were funded by the German Research Foundation, the Austrian Science Foundation, INTAS, the Wellcome Trust, the British Society for Antimicrobial Chemotherapy, and Science Foundation Ireland.