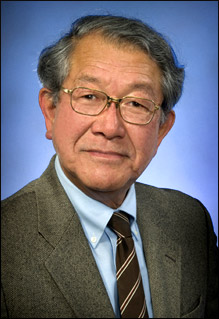 UPTON, NY — Satoshi Ozaki, a physicist at the U.S. Department of Energy’s Brookhaven National Laboratory, will be honored as a distinguished Asian American professional at a ceremony on May 9 at the annual Asian Pacific American Heritage Month Celebration to be held at Stony Brook University’s Charles B. Wang Center.

“I am honored to receive this recognition,” Ozaki said. “I also appreciate the respect I have received from the colleagues with whom I have worked at Brookhaven Lab over many decades and from the members of the Laboratory’s Asian Pacific American Association as a friend and a senior advisor.”

Ozaki will be unable to attend the May 9 ceremony, so Lab Director Sam Aronson will accept a proclamation from County Executive Steve Levy on behalf of Ozaki at the Wang Center Theater in a ceremony starting at 4 p.m.

Ozaki, with Brookhaven Lab’s Michael Harrison, led the decade-long development and construction of the Laboratory’s world-class accelerator, the Relativistic Heavy Ion Collider (RHIC). About 1,000 physicists from around the world run experiments at RHIC, colliding subatomic particles known as heavy ions head-on to study the type of matter that existed a millionth of a second after the Big Bang. In 2005, RHIC physicists discovered a “perfect” liquid, a type of matter that has not existed since the beginning of the universe.

In 2002, RHIC became the world’s first and only accelerator to collide high-energy beams of polarized protons — protons that spin in the same direction. Physicists at RHIC hope to solve the mystery of what causes proton spin.

Before Ozaki started the RHIC Project, he was invited in 1981 to join the National Laboratory for High Energy Physics, a research institute in Japan also known as KEK, to direct the construction of TRISTAN, the first major high-energy particle collider in the country. Ozaki completed TRISTAN on time and within budget. The facility accelerates and stores beams of electrons and positrons at 30 billion electron volts, the highest energy in the world at the time the accelerator started operations in 1987.

After earning a Ph.D. in physics from the Massachusetts Institute of Technology in 1959, Ozaki joined Brookhaven Lab as a research associate. He rose through the ranks to become a tenured senior physicist in 1972. He joined KEK in 1981 to work on TRISTAN, and then returned to Brookhaven in 1989 to head the RHIC Project. Besides completing the $660-million collider, Ozaki was instrumental in bringing polarized proton capability to RHIC with funding support from the RIKEN Institute of Japan.

Since 2000, Ozaki has been the Special Assistant to the Laboratory Director on Accelerator Projects, and from 2005 to 2007, Ozaki directed the Accelerator Systems Division for Brookhaven’s NSLS-II Project. Currently, he is a senior project advisor for the project, which involves the construction of a $912-million synchrotron light source that will provide extremely bright x-rays for basic and applied research in many areas of science.

Ozaki serves on numerous advisory and review committees for U.S. and international institutions, laboratories and government agencies. He is a Fellow of the American Physical Society (APS), and he was awarded the APS 2009 Robert R. Wilson Prize for outstanding achievement in the physics of particle accelerators. He was honored as “Man of the Year in Science” by the Times Beacon Record Newspapers in 2008, and in 2007, Ozaki, with Brookhaven’s Michael Harrison, received the IEEE Particle Accelerator Science & Technology Award.