Material scientists at Washington University in St. Louis have developed a technique for a bimetallic fuel cell catalyst that is efficient, robust and two-to-five times more effective than commercial catalysts. The novel technique eventually will enable a cost effective fuel cell technology, which has been waiting in the wings for decades and should give a boost for cleaner use of fuels worldwide. 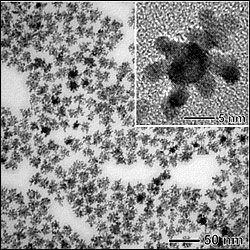 Younan Xia, Ph.D., the James M. McKelvey Professor of Biomedical Engineering at WUSTL led a team of scientists at WUSTL and the Brookhaven National Laboratory in developing a bimetallic catalyst comprised of a palladium core or "seed" that supports dendritic platinum branches, or arms, that are fixed on the nanostructure, consisting of a nine-nanometer core and seven-nanometer platinum arms. They synthesized the catalysts by sequentially reducing precursor compounds to palladium and platinum with L-ascorbic acid (that is, Vitamin C) in an aqueous solution. The catalysts have a high surface area, invaluable for a number of applications besides in fuel cells, and are robust and stable.

Xia and his team tested how the catalysts performed in the oxygen reduction reaction process in a fuel cell, which determines how large a current will be generated in an electrochemical system similar to the cathode of a fuel cell. They found that their bimetallic nanodendrites, at room temperature, were two-and-a-half times more effective per platinum mass for this process than the state of the art commercial platinum catalyst and five times more active than the other popular commercial catalyst. At 60 degrees C (the typical operation temperature of a fuel cell), the performance almost meets the targets set by the U.S. Department of Energy.

The Department of Energy has estimated for widespread commercial success the "loading" of platinum catalysts in a fuel cell should be reduced by four times in order to slash the costs. The WUSTL technique is expected to substantially reduce the loading of platinum, making a more robust catalyst that won't have to be replaced often, and making better use of a very limited and very expensive supply of platinum in the world.

The study was published in the online journal Science.

"There are two ways to make a more effective catalyst," Xia says. "One is to control the size, making it smaller, which gives the catalyst a higher specific surface area on a mass basis. Another is to change the arrangement of atoms on the surface. We did both. You can have a square or hexagonal arrangement for the surface atoms. We chose the hexagonal lattice because people have found that it's twice as good as the square one for the oxygen reduction reaction.

"We're excited by the technique, specifically with the performance of the new catalyst."

Xia says seeded growth has emerged recently as a good technique for precisely controlling the shape and composition of metallic nanostructures prepared in solutions. And it's the only technique that allowed Xia and his collaborators to come up with their unconventional shape.

"When you have something this small, the atoms tend to aggregate and that can reduce the surface area," Xia says. "A key reason our technique works is the ability to keep the platinum arms fixed. They don't move around. This adds to their stability. We also make sure of the arrangement of atoms on each arm, so we increase the activity."

Xia and his collaborators are exploring the possibility of adding other noble metals such as gold to the bimetallic catalysts, making them trimetallic. Gold has been shown to oxidize carbon monoxide, making for even more robust catalysts that can resist the poisoning by carbon monoxide — a reduction byproduct of some fuels.

"Gold should make the catalysts more stable, durable and robust, giving yet another level of control," Xia says.