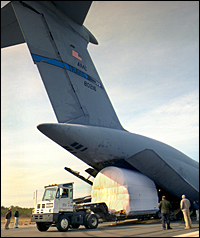 The six-ton, $10 million "Time Projection Chamber," part of a huge experiment at BNL's next atom smasher, is shown here as it emerges from the belly of a U.S. Air Force Galaxy C5C cargo plane at Gabreski Airport in Westhampton, where it arrived from California on November 6. White wrappings protected the intricate 14-foot-long apparatus, which took more than 90 people from nine institutions four years to design and build.

The TPC arrived at 8:30 a.m. on a U.S. Air Force cargo plane at Gabreski Airport in Westhampton. It was then transported to the Laboratory aboard a flatbed truck, and arrived at Brookhaven in mid-afternoon. Over the next year, it will be tested and installed at Brookhaven's Relativistic Heavy Ion Collider (RHIC) atom smasher as part of a house-sized experiment called STAR.

"The TPC is the heart of an experiment that will be conducted by approximately 400 scientists and engineers from 33 institutions and laboratories in the U.S. and six foreign countries," said Dr. Satoshi Ozaki, who heads the RHIC project.

STAR is one of four experiments at RHIC, which will be used by close to 900 scientists from 19 countries and 22 U.S. states when it begins smashing atoms in 1999.

The STAR TPC is the largest detector of its kind in the world. Once installed inside a giant ring of electromagnets in a large hall along the 2.4-mile RHIC ring, it will act as a sort of "3-D camera" for subatomic particles, to help physicists in their quest to understand a form of matter that has not existed since shortly after the Big Bang.

After being unloaded from the plane, the fragile device traveled at a snail's pace to the Laboratory, escorted by a Suffolk County Police highway patrol. By early afternoon it reached its final destination at BNL's Relativistic Heavy Ion Collider, where it will soon take its place as the centerpiece of a massive experiment called STAR. Beginning in early 1999, nearly 400 scientists and engineers from 33 institutions in the U.S. and abroad will use STAR to look for tiny, fleeting subatomic particles that will tell them if they've re-created a form of matter that hasn't been seen since a few moments after the Big Bang.

Equipped with 138,000 channels of highly sophisticated electronics, the STAR TPC will capture the thousands of particles that will be created at RHIC after each head-on collision of speeding gold atoms. After recording tens of millions of bytes of information in the aftermath of each collision, the TPC's detectors and computers will be able to go "backwards in time," reconstructing the collision in three dimensions.

The STAR TPC was shipped to BNL from Lawrence Berkeley National Laboratory in California, where it was designed and built over the past four years by more than 90 people from nine institutions. 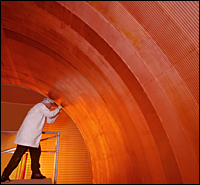 The STAR TPC under construction at the U.S. Department of Energy's Lawrence Berkeley National Laboratory in Berkeley, California. 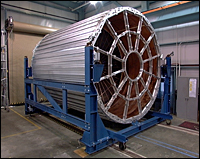