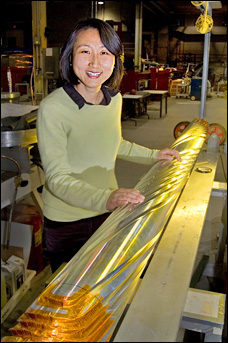 UPTON, NY — The Asian Committee for Future Accelerators and the organizing committee of the 2010 First International Particle Accelerator Conference (IPAC’10) have awarded Mei Bai, a scientist at the U.S. Department of Energy’s Brookhaven National Laboratory, a prize for her significant and original contributions to the field of accelerator research during her early career. She will receive the prize, which consists of 300,000 Japanese yen (about $3,000) and a framed certificate, at IPAC’10, which will be held in Kyoto, Japan, May 23 - 28.

“I am very honored to receive this prize,” Bai said, “but keeping Brookhaven’s accelerators running smoothly for polarized proton experiments is really a team effort. I’ve had the privilege to expand my understanding of accelerators with the help of many knowledgeable and creative colleagues at the Laboratory. This award is as much theirs as it is mine.”

Bai was cited “for her significant contributions to spin dynamics and polarized proton acceleration in circular accelerators – in particular AGS [the Alternating Gradient Synchrotron] and RHIC [the Relativistic Heavy Ion Collider], and to successful polarized proton beam collisions at 500 GeV [giga electron volts] centre of mass.”

In the 1990s, Bai and collaborators devised a way to keep protons in an accelerating beam “polarized,” or all spinning with their axes in the same direction. The technique was successfully demonstrated at Brookhaven’s AGS, an accelerator that is a key part of the RHIC complex. Physicists from around the world study polarized protons at Brookhaven’s RHIC to determine the answer to a fundamental question – how protons get their spin, an intrinsic property of the particle that is not completely understood.

Bai and collaborators found that adding a radio-frequency (RF) dipole magnet to an accelerator could counteract the effect of focusing magnets that interfere with the polarized protons’ alignment. Like a child pushed on a swing, the protons are pushed, or “kicked,” as they speed through the accelerator at nearly the speed of light. This kick destroys their natural alignment, but the kick from the RF dipole produces a frequency that keeps the protons’ spin aligned, both horizontally and vertically, which is necessary for experiments.

Recently, Bai has focused on the RHIC polarized proton program. In 2004, 2005 and 2009, she was the RHIC polarized proton run coordinator, which requires her to make sure that all systems are working at optimum level in the accelerator, which is the world’s largest dedicated to nuclear physics. “As a run coordinator, it was my daily duty to coordinate all of the operations to deliver a polarized proton beam that met the requirements of the experiments,” Bai said. “I was also responsible to organize the efforts to troubleshoot when problems developed. During that time, I was on call 24 hours per day. It was tough, but was fun and a very rewarding experience”

Bai earned a bachelor’s degree in engineering from the University of Electronic Science and Technology of China, Chengdu, China, in 1989; a master’s degree in physics from the University of Science and Technology, Hefei, China, in 1992; and a Ph.D. in physics from Indiana University in 1999. She joined Brookhaven Lab in 1999 as a research associate in the RHIC Accelerator Physics Group, was promoted to associate scientist in 2001, and to scientist in 2004. Bai was the recipient of the American Physical Society’s Outstanding Doctoral Thesis Research in Beam Physics Award in 2000.