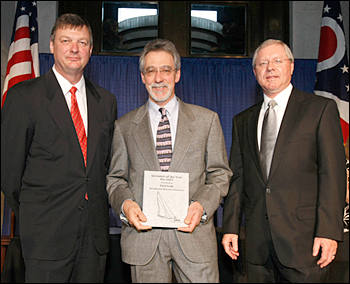 UPTON, NY — Paul Kalb, a leading engineer in environmental research at the U.S. Department of Energy’s Brookhaven National Laboratory, was honored as Brookhaven’s “Inventor of the Year” by Battelle, the global science and technology company that, together with Stony Brook University, manages Brookhaven Lab. Kalb was honored at Battelle’s annual recognition program at the Ohio Statehouse in Columbus, Ohio, on April 30, along with inventors from Battelle and from three other national laboratories that it manages.

Kalb has specialized in developing and applying technologies for hazardous- and radioactive-waste management, environmental cleanup, decontamination and decommissioning, and environmental security. In 2009 and 2010, Kalb and his colleagues, Brookhaven Lab’s John Heiser and Mark Fuhrmann, formerly of Brookhaven, received two U.S. patents for a new method to passively concentrate and remove toxic mercury from soil, sediment, sludge, and other industrial waste. This novel method, called “In Situ Mercury Stabilization,” allows mercury to be removed without excavating and replacing large volumes of toxic soil or other material, thereby reducing cleanup cost and environmental impact. The inventors were honored for this technology earlier this year by the Long Island Technology Hall of Fame for the “Most Innovative Patent of the Year” in the area of energy and the environment.

“I am pleased to be honored for my work at Brookhaven,” Kalb said. “It’s challenging to develop environmental cleanup technologies – and I find it especially rewarding to advance them from the laboratory to industry, so they can be used to solve real problems. It’s similar to the pride one takes as a parent, when you’ve helped nurture your children and then send them off into the world with the hope that they can improve it in some small way.”

At Brookhaven since 1980, Kalb has developed numerous cutting-edge environmental technologies. He is the co-inventor of 10 U.S. patents, the most recent issued in April 2010 for the passive method to cost-effectively extract mercury from contaminated waste. He has coauthored several books on innovative technologies for waste treatment and has written numerous peer-reviewed articles on waste encapsulation. He is currently the division head for Environmental Research and Technology in the Lab’s Environmental Sciences Department.

Kalb holds a bachelor’s degree in mechanical engineering technology from Binghamton University and a master’s degree in nuclear engineering with a certificate in energy policy and engineering from the Polytechnic Institute of New York.