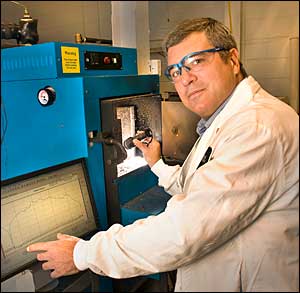 This new department was formed to bring greater focus on research and commercialization of renewable and clean energy technologies, including smart grid, solar, biofuels, and storage. With an annual budget of $12 million, 30 Brookhaven Lab scientists, engineers, and support staff managed by Looney will work with businesses, universities, and other laboratories to overcome the obstacles to the adoption and deployment of renewable energy technologies. They will also perform fundamental and applied research to increase the efficiency of existing energy technologies, such as electrical energy storage, oil combustion-based heating systems, and energy transmission and storage.

“We would like to enhance Brookhaven Lab’s reputation locally, regionally and nationally as a leader in developing and commercializing new and improved energy technologies,” Looney said. “Our focus will be on strong, regional partnerships in New York State and the Northeast, although our reach will extend nationwide. We’ll work with commercial enterprises to bridge the gap between discovery and deployment.”

Looney earned a B.S. in physics from the University of Delaware in 1984, then went on to earn two more degrees in physics: an M.S. in 1986, and a Ph.D. in 1987. From 1987 to 2002, Looney held several research positions at the National Institute of Standards and Technology (NIST) in Gaithersburg, Maryland, eventually becoming a program analyst responsible for developing policy and program plans for all aspects of NIST research.

In 2002, Looney was named the Assistant Director, Physical Sciences and Engineering, in the White House Office of Science and Technology Policy, where he worked closely with other White House offices, including the Office of Management and Budget, to coordinate policy development and set budget priorities. Looney joined Brookhaven Lab in 2005 as Assistant Laboratory Director for Policy and Strategic Planning, which included oversight of the Laboratory’s tech transfer and commercialization programs. In his new position at Brookhaven, he will execute the strategies that he helped to create.

Looney is a Fellow of the American Vacuum Society. He received the Department of Commerce Bronze Medal in 1991, and the NIST Measurement Science Award in 1992.